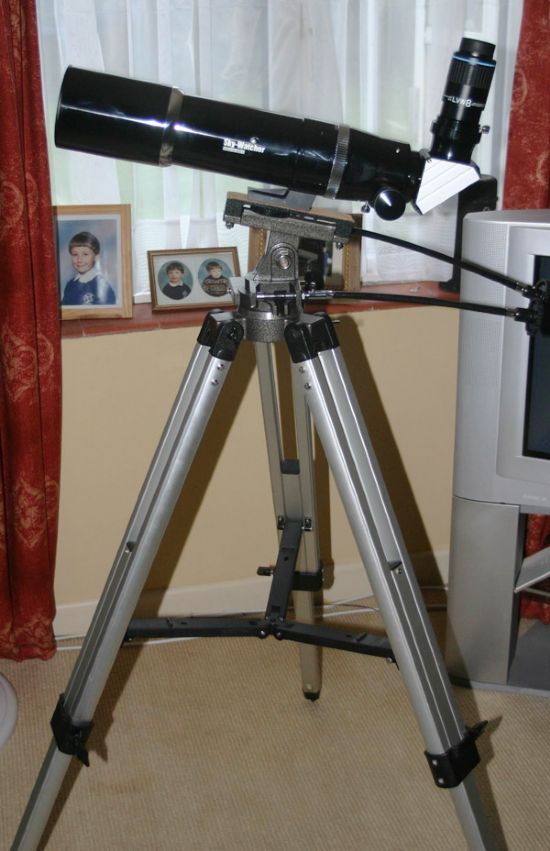 The other month Patrick Moore and I were discussing telescopes and which one we thought was best suited to which task. We both agreed that the refractor was the best for planetary work for both of us.

My return to Patrick’s last week saw us able to put a number of scopes through their paces and at the end Simon (my son) chose to retain the Sky-watcher 80mm Pro-series Equinox on SynScan HEQ5 mount. This was such a great performer that I decided to undertake a separate review of it (after Patrick had finished “trying it out“)!

I normally use my own William Optics 66mm APO scope as it is ideal for carrying and takes up little space, it is also a good benchmark for quality when testing other scopes. The Equinox is a refractor that has ED glass as one of the elements in its doublet objective. This drastically reduces the amount of ‘false colour’ seen when viewing bright objects through the telescope, like the Moon or planets.

The Sky-Watcher ‘scope arrived packed inside its aluminium case, with that being well packaged in a strong cardboard box. With polystyrene chips supporting the case inside the cardboard box, not even the worst courier could have done any damage to it during transport.

As you can see from the photograph of the two cases side by side, the WO has less room for equipment that you may wish to take with you when observing, whereas the Sky Watcher case has room for up to three 2” eyepieces. A separate photograph also shows that it has under foam storage for filters or small eyepieces. The case however is obviously considerably heavier and bulkier. 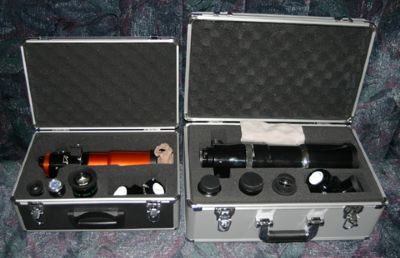 For the price of between £380 and £425 all you get is the tube assembly and case. Add to that a couple of decent eyepieces and a diagonal and you are looking at the cool end of £1000.00.

Is it worth it? We will see…

There is no provision for a finder scope on the actual tube as there is with the William Optics. This I miss as I have a Vixen zero power finder which is used all the time on my Orion Optics SPX reflector, and a WO unit for use on the little WO66mm. You can buy “stick on” holders but I would not do this. However, there is another point to remember when using a scope for photography, and that is tracking and accurate polar alignment. Without experience you will find locating an object more difficult without a finder and accurate alignment of a mount is also easier with a finder. To help with polar alignment I have had to buy an illuminated reticule for the Sky Watcher, adding a further £85.00.

When it comes to ‘finding’ targets, some will argue that a finder-scope is not always needed on a rich field scope such as this with a field of view of about 2 degrees. However, I find it easier to place the eyepiece I want to use in the ‘scope, (say an 18 mm) and then use the finder-scope to locate the object, rather than first placing a 30 mm eyepiece in, then locating the object and then finally swapping the eyepiece to the 18mm!

The test scope came with two diagonals: a £45 Sky-Watcher and a £100 Dielectric Sky-Watcher. In my opinion the extra £55 incurred to buy the dielectric diagonal for the APO is well worth the additional cost, as the difference in views is clear to see. I tested both units, and both in build quality and crispness, along with improved contrast, it made all the difference. Whilst the £45 diagonal is more than adequate for a non APO
refractor, the dielectric Sky Watcher has a definite edge. Considering this is a dielectric diagonal of all-alloy construction it is superb value, and as the WO version had the same specification but was twice the price, it seems you pay for the name.

With my WO ‘scope the diagonal screws onto the visual back at the end of the focuser drawtube. The Equinox uses a more conventional slide-in fit. This caused me a little concern, as when the WO diagonal is screwed in place it cannot “fall off”, whereas failing to pay attention to the tightness of the screws on the Equinox could lead to you picking your diagonal up off the floor, as I have seen happen to people on two occasions! However, when inserted it was firm and there was no play. 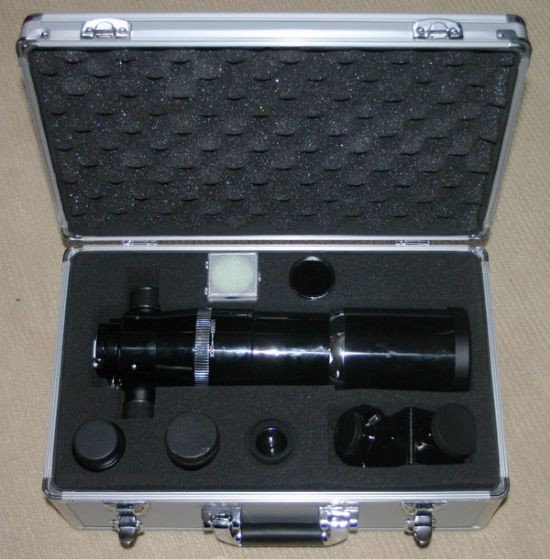 Setting the scope up on the supplied SynScan HEQ5 mount (and, more useful for casual viewing, AZ-3 alt-az mount) was simplicity itself. It comes with a “tripod mount” which slips into the standard Vixen dovetail mount on most scopes or can be attached to a good strong camera tripod. Due to the weight of the scope though, you do need a substantial tripod for stability. I would suggest a 1600 Unilok or better (Unilok was designed by the man who later designed the Benbo tripod system).

With the diagonal and extendable dew shield both in place you are looking at a length of close to 24”; quite a scope, and believe me extremely heavy. In the photograph of the WO and Sky-Watcher side by side they look similar but this is an illusion. The quality of both is superb and no one who has chosen one over the other would be disappointed, but the sky watcher is a lot larger and heavier, and whilst portable, the WO is more suited to the car boot and especially the aeroplane as hand-luggage. 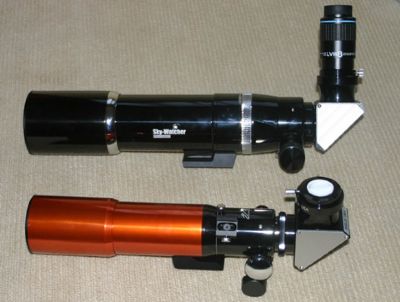 The construction of the scope (and all I have for comparison are my WO and the other test scope - the 100mm Pro series Sky-Watcher APO) is superb. The 100mm and 120mm Pro series APOs from Sky-watcher (gold tube) are soon to be replaced by 100mm and 120mm Equinoxes. There is no comparison: whilst the quality of view from the older 100mm was excellent, the build quality was not close. 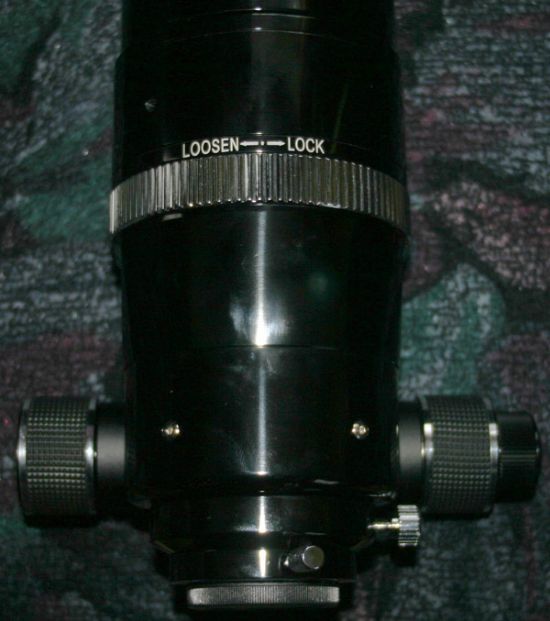 Turning to the focusing. As with the WO the Equinox uses a two speed Crayford focuser, which can be adjusted for tension, and whilst a little on the “tight” side when new, it was a joy to use at both speeds. Also as with the WO the whole of the rear assembly unlike the older 100mm pro series can be rotated so that the Crayford focuser remained level no matter what orientation the scope ended up in, which is also very useful when an SLR or Astro-cam is attached. In the photograph you can see the locking collar which you loosen to turn the rear section and lock again. Whilst it looks better than the single screw of the WO it works neither better or worse, and the only benefit I can see is that a single screw could damage the inside of the unit whereas the friction locking collar does no damage and is easier to grip in the cold. Accuracy of focus was very good and in common with many newer scopes the Equinox has a scale marked on to the top of the drawtube to help focus when using the ‘scope for photography.

With the ‘scope set on the SynScan HEQ5 GOTO mount and in Patrick’s back garden, the first object viewed was Mars, beautiful and red. It was amazing in fact as the three days prior to the ‘scope’s arrival and the following three days were 100% rain; we had just the one clear night.

With a magnification of 50 you could clearly see the detail on the Planet. Changing to a 25mm eyepiece (I do wish I had taken mine) we moved to Orion and the Great Orion Nebula. With a Nebula filter in place it was a wonderful sight as was the next target, Mizar, viewed with 25mm and 10mm: pin sharp. Finally my favourite: the Pleiades! Buy this ‘scope just to look at them! This was my last object viewed and with a 20 mm wide angle eyepiece of Patrick’s was a sight to behold.

I could only undertake a short viewing session with the scope as there were seven others to review, also the weather closed in, I look forward to a clear night soon back in Devon.

From the photograph of the ‘scopes side by side you can hopefully see the quality of the baffle in the Sky-watcher, and the coatings of the optics. The WO on the left demonstrates a dark blue coating whilst the Sky-Watcher uses a very dark green. 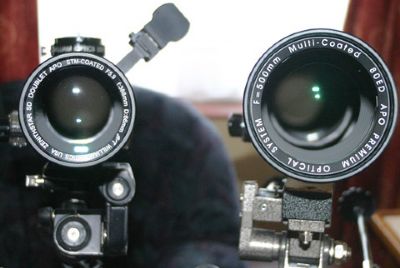 Another photograph of the ‘scopes side by side shows the difference in size and length. The quality of the scope and views it offers make this a superb scope, the quality of the black finish and machining of the parts make it a must-have. I only wish the 120mm and 100mm scopes had been available for test.

If you are looking for a quality scope for either viewing or imaging you would be hard pressed to find anything better when you combine it with a good quality eyepiece and dielectric diagonal.

Patrick’s reviews, which he undertook with Simon and myself, are now available on the OVL (Sky Watcher) website for anyone interested. I am in no way connected with OVL or Sky-Watcher personally and have nothing to gain from this.