Cancer is a constellation of the zodiac through which the Sun passes in late July to early August. This wasn’t always the case. Due to a bulge at its equator the Earth has a wobble, known as precession, which causes variations in the apparent location of celestial objects through the ages. In ancient times the Sun would pass through Cancer during midsummer, which is why the latitude where the sun shines directly overhead during that day is known as the Tropic of Cancer. 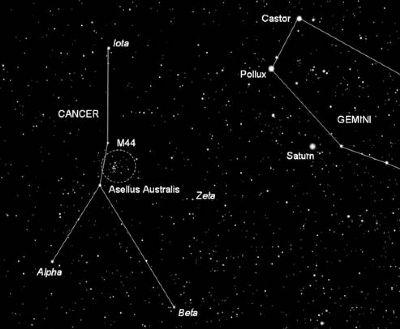 Cancer represents the Crab which attacked Hercules during his fight with Hydra, the Water Snake. Although not a hugely prominent constellation, it is fairly easily found due south and high up in the sky, just east of Castor and Pollux in Gemini, and also Saturn, which is currently visiting that constellation. The early part of this month is the only time left before summer twilight will drown out all but the brightest stars until August. It is worth trying to catch a glimpse of this constellation before then, as it contains one of the finest of the galactic star clusters in the sky which can be spotted with the naked eye. It appears at number 44 in Charles Messier’s catalogue of “fuzzy” objects (M44) and is known as Praesepe, the manger. It is also popularly known as the Beehive Cluster. It is a large swarm of about 50 stars of magnitude 6 and fainter and appears as a misty patch to the naked eye. Because of its large angular size (3 times that of the full moon) it is best viewed in binoculars.

The cluster lies right next to the ecliptic, close to Delta Cancri, also known as Asellus Australis, at a distance of about 577 light years, and is one of the nearest and brightest of the galactic star clusters. The bright central region of the cluster is about 13 light years in diameter. The whole cluster moves through space at approximately the same speed, and in the same direction, as the Hyades cluster in Taurus. It has been proposed that these clusters may have had a common origin. More recently it has even been suggested that M44 is actually two star clusters in the process of crashing into each other. It is practically impossible for stars to collide in such an event, due to the huge distances between stars, and the clusters will merely merge at first. The stars may eventually drift apart entirely. It is likely that our Sun was once a member of a galactic cluster.

When, later this month, the sun doesn’t dip low enough below the horizon to darken the sky entirely for astronomical purposes, there will still be a few opportunities for those of us with telescopes. Both Zeta and Iota Cancri are easy double stars which can be seen with small telescopes. Zeta consists of two yellow stars of magnitudes 5 and 6 respectively. Iota consists of a 4th magnitude yellow giant with a 7th magnitude companion.

Jupiter is back in the early evenings too. It rises at roughly 8pm in a south- south easterly direction, reaching its highest point in the sky around 1am, and getting earlier as Spring moves on. Jupiter is very bright and is easily visible in twilight. It is a superb object in a small telescope at higher powers, with the darker coloured bands in the upper atmosphere of the planet easily visible. If you own a pair of good binoculars, it is still possible to spot Jupiter’s delightful 4 brightest moons, discovered by Galileo, neatly arranged in a straight line, but they will be found in different spots on this line as the days go on. This is because we see their orbits edge on. Sometimes some, or all, of the moons will be in front of, or behind Jupiter, in which case we can only see 3 or less of them. With a larger telescope it is sometimes possible to spot the shadow of one of the moons on the upper cloud deck of the planet itself.