Big Eyes on the Sky

Taking control of a really powerful £5m research grade telescope on top of a 14,000 ft dormant volcano in Hawaii is something a lot of amateur observers would love to do sometime. Well, what are you waiting for? All you now need is a PC or Mac with an internet connection and you can!

The Faulkes Telescope project is perhaps one of the most existing developments ever for people with an interest in practical astronomy. Originally an idea by Martin “Dill” Faulkes, who aims to encourage a new generation of young people to take an interest in science and technology, the Faulkes Telescope project is aimed at providing schools and societies with a chance to use a high quality astronomical instrument as a part of their educational programme.

There are currently two Faulkes Telescopes: one on Haleakala in Maui (FT North), Hawaii, and one at the Siding Springs Observatory in Australia (FT South). Currently only FT North is operational, with FT South to follow, hopefully soon.

Each of the Faulkes Telescopes were built by Birkenhead based Telescope Technology Ltd. They have a primary mirror with a diameter of 2 metres, offering the capability to “look” at objects that are more than half a million times dimmer than we can see with the naked eye. The 23 tonne, 8 metre tall, and 6 metre wide telescopes are remotely controlled via the internet. They have state of the art CCD cameras which are kept at very low temperatures in order to increase their sensitivity. Unlike digital cameras, the CCD cameras on the Faulkes Telescopes can only produce monochrome images, but by making multiple images using a set of filters it is possible to make full colour photographs of very faint and distant objects. There are also a number of filters that allow you to boost light from specific sources such as hydrogen and oxygen, which are abundant in interstellar clouds.

Because the telescopes are in a different location from us, we can use them during our daytime, and they also cover a much more southerly part of the sky. At our latitude it is not possible to see many of the marvellous objects of the Southern sky, but with the Faulkes telescope you can 'see' things that are normally well below our horizon. Especially Sagittarius and Scorpio, which are two constellations that have always posed a real problem for northern observers. Because of their direction towards the centre of our Galaxy, these constellations boast some of the largest numbers of interesting deep space objects. 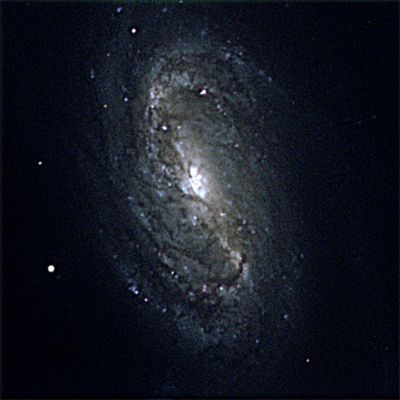 Schools can use the Faulkes Telescopes for free. Yes, you’ve read that correctly, there is no charge for use of the Faulkes Telescopes by schools and colleges. They can apply for three half hour observing slots straight away by simply applying online at www.faulkes-telescope.com. That website will also provide a lot of information to help them get the most out of their observing time.

It is essential to prepare well for your observing sessions because half an hour may sound long, but you will find that making a single observation will take on average 5 minutes, so you will only be able to slot in 6 observations in your allotted half hour. Once the images are made, they can be processed using software, of which some is again free of charge (see the website for details).

Courtesy of the Royal Observatory in Edinburgh, members of Highlands Astronomical Society got a chance to have a go on FT North during a science event in Forres late last year. Under the expert supervision of Matt Hollister from the Royal Observatory, and Bill Lesley from Moray’s Astronomy Club SIGMA, they produced some excellent images of over 35 deep space objects and near Earth orbiting asteroids. Some of their images were featured in various magazines and websites and used by international astronomical agencies to update their data.

You don’t need to be a school or college to be able to use the Faulkes Telescopes. Other organisations with an interest can apply for time on the scopes. They would need to pay a modest fee of £50 per half hour slot. Because of their experience, Both SIGMA and Highlands Astronomical Society have offered, where possible, to help schools and organisations with their Faulkes Telescope preparations and observations.

And there’s even more to come. Recently the Faulkes Telescope Project has been bought by the UK division of Las Cumbres Observatory. This organisation was established in 1992 by computer legend Wayne Rosing, Google's former Vice President of Engineering. Rosing is planning to increase the network of robotic telescopes for educational use with several other, even larger, telescopes. Closer to home, Highlands Astronomical Society themselves are in the process of upgrading their own observatory at Culloden, and are hoping to open next year for a series of public events to celebrate the 2007 Highland Year of Culture.