The Lion of the night sky

The King of the Beasts roars his way across the southern sky as winter melts into spring. This is Leo, the constellation of which actually resembles the lion it represents.

The head is marked by six stars forming a sickle shape or backwards question mark. The lowest star in this formation is a bright blue-white star called Regulus, which takes its name from the Latin, Rex, which means King and from which we derive our word regal.

Stretched out behind are three stars in the form of a triangle which make up his tail and indeed Denebola, the name of the second brightest star in Leo, means ‘the lion’s tail’.

Leo is thought to represent the Nemean Lion slain by Hercules during his fifth labour. The lion could not be killed with weapons so Hercules had to strangle it with his bare hands thus freeing the people of Nemea from a fierce and frightening beast.

Regulus is the 21st brightest star in the sky. It is actually 160 times as bright as our Sun but lies at a distance of 69 lightyears. Regulus is only a few hundred million years old making it very young. It spins extremely rapidly, with a rotation period of only 15.9 hours. This causes it to have an oblate or flattened shape. If it rotated just 16% faster the star would tear itself apart.

In the middle of April, Regulus, the Moon and the planet Saturn form a close trio of bright objects that can be seen with the naked eye. However, use a small telescope and each will reveal a secret. 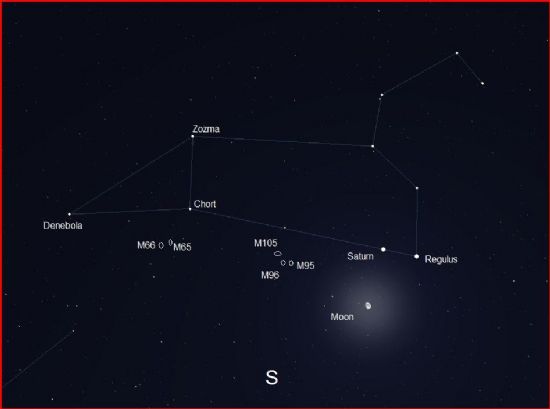 For now you will see that Regulus has a widely separated, much fainter, companion star. This companion is actually part of a pair of stars orbiting each other and which both orbit Regulus every 130,000 years.

The Moon reveals its complex mountainous areas and deep valleys, which appear as crinkles along the edge of the shadow-line, or terminator. These features are always best seen when our closest companion is not yet fully illuminated by the Sun. Mid-April the Moon will be between half and full (so ‘waxing gibbous’) and this will be an ideal time to observe the highlights of the terminator region.

Saturn’s ‘open’ secret is its rings but they are now almost edge on revealing more of the planet thus allowing us to see a less obvious secret: that like Jupiter, Saturn also has belts.

When looking at the night sky around the constellation of Leo we find ourselves looking away from our Milky Way Galaxy and into the depths of space where many other galaxies lie. The Hubble Ultra Deep Field is a long exposure photograph (800 exposures over 400 Hubble orbits) taken in 2004 of a small region of space in the direction of the Fornax constellation in the Southern Hemisphere. The patch of sky photographed covers an area no larger than a 1 mm by 1 mm piece of paper held 1meter away and contains an estimated 10,000 galaxies. We are probably looking back in time more than 13 billion years and shows that our universe is packed with galaxies. Most are too faint to be visible even to the most powerful ground based telescopes but there are still many that are within reach of a small telescope and the area around Leo is a rich hunting ground.

M65 and M66 are spiral galaxies, which lie about 30 million lightyears away. Find them just south of the star called Chort, which forms the inner part of Leo’s triangular tail. Although faint, if you happen to be out on a clear, moonless, transparent night when Leo is high in the southern sky, you may just be able to glimpse these galaxies through large binoculars. However, they and another nearby galaxy, known as NGC 3628, are best spotted through a telescope.

Move along to your right and half way between Chort and Regulus is another trio of galaxies M95, M96 and M105. These are a little fainter and although they can be viewed with a small telescope, one of eight inches would enable their structure to be seen more clearly. M95 and M96 are both spirals whereas M105 is an elliptical galaxy. The Hubble Space Telescope has found that the centre of M105 contains a mysterious object of about 50 million solar masses.

Leo Minor is a tiny inconspicuous constellation just above Leo and consists of three stars. It has no associated myth and seems to have been introduced simply to put together some faint stars behind which are yet more galaxies. However, most of the galaxies are quite faint and require a large telescope to view them.

Once Leo takes centre stage, we know that spring is on its way. The Vernal equinox was March the 20th so the nights are getting shorter and the days longer. Add to that the hour we have lost due to British Summer Time and the chances of observing the night sky reduce markedly as spring marches forward. Make the most of this time of year by exploring the treasures this regal constellation has to offer.