Pluto and Charon – the Distant Relatives

American astronomer Percival Lowell is perhaps best remembered for his observations of Martian “canals”, which he thought had been constructed by intelligent beings, but which later turned out not to exist. However, he’s also been instrumental in the eventual discovery of the planet Pluto, which very much exists. Lowell spent 13 years searching for “planet X”, a theoretical ninth planet causing observed variations in Uranus’ and Neptune’s orbits. This search continued after his death in 1916. It was eventually a 24 year old Kansas lab assistant, Clyde Tombaugh, who found Pluto on 18 February 1930 by comparing photographic plates made of the plane of the solar system, known as the ecliptic. Pluto is too small to be planet X Lowell had hoped to find, so it was a chance discovery after all.

Pluto is the smallest planet in our solar system. It only weighs a fifth of the Moon and its diameter is slightly bigger than a 6th of that of Earth. On 22 June 1978, James Christy and Robert Harrington discovered that Pluto has a moon too. It was later called Charon, after the ferryman of the dead according to Greek mythology. Charon is a relatively big moon for Pluto, and has contributed much to what we now know of the pair. Because of its great distance from the Sun, it orbits between 30 and 50 times as far from the Sun as we do, Pluto has not yet been visited by any spacecraft.

Pluto is most of the time the furthest planet in our solar system, but due to its very elliptical orbit, for about 20 years of the 249 years it takes to go round the Sun once, Pluto is actually closer than Neptune. This happened not so long ago; Pluto crossed Neptune's orbit on 21 January 1979, made its closest approach 5 September 1989, and remained within the orbit of Neptune until 11 February 1999. 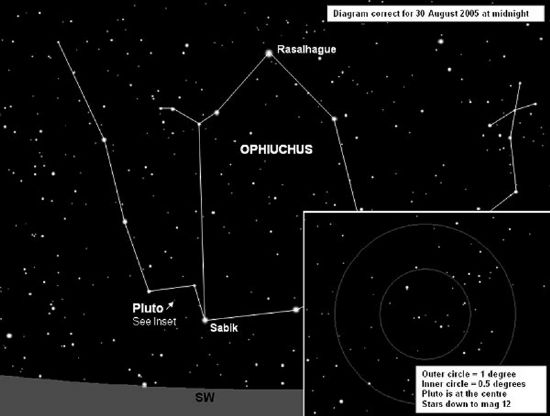 Unlike most planets, but similar to Uranus, Pluto rotates with its poles almost tilted side-on. Pluto's rotational axis is tipped 122 degrees. When Pluto was first discovered, its relatively bright south polar region was the view seen from the Earth. Pluto appeared to grow dim as our viewpoint gradually shifted from nearly pole-on in 1954 to nearly equator-on in 1973. During the period from 1985 through 1990, Earth was aligned with the orbit of Charon such that an eclipse could be observed every Pluto day just over 6.4 hours. This provided opportunity to collect significant data about these worlds. Charon orbits Pluto very closely, the average distance is only slightly more than the diameter of Earth.

From precise measurements of their diameters and their orbital behaviour, it is possible to calculate the density of the pair, and make assumptions of their composition. It is thought that Pluto consists of up to 75% rock mixed with ice, whereas Charon is mostly ice, which means that Charon was most likely formed separately. Solid methane on Pluto’s surface means that the average temperature must be less than -200 degrees C. When Pluto is furthest away from the Sun, it gets so cold that its atmosphere freezes and falls to the surface, only to evaporate again when it’s getting closer to the Sun.

There has been much debate as to whether Pluto is actually a planet. Some believe that it is a large object from the so called Kuiper Belt, a region beyond Neptune’s orbit believed to contain many thousands small icy worlds, of which some have been discovered in recent years.

Because Pluto is very small and distant it is a very challenging object for the amateur observer. Very few people have actually ever seen it. You would need a telescope with an aperture of at least 250mm and very good conditions. Also, local viewing conditions for Pluto are not ideal as it is currently in a region in the sky that is not easily observed from our location. Because of its very long orbital period, it will take quite a few years before these conditions will improve. If you do have the equipment that allows you to see Pluto, the end of this month will be as good a good chance as any.