The Teapot At The Centre Of The Galaxy

Ever wondered what we would be able to find at the centre of our Galaxy? Most astronomers would argue it is a super massive black hole. Since black holes are yet impossible to detect directly with even the most advanced telescopes on earth or in space, amateur astronomers would need to content themselves with a teapot instead.

And even that teapot is a challenging object for observers at our latitude. The asterism referred to forms the centre of the constellation Sagittarius, The Archer. Its position in the sky is very low, at maximum only a few degrees above the horizon. Its highest position is during July, when it doesn’t really get very dark, so we have to wait until August when the skies are getting dark enough again to be able to get a chance to see it, or at least a part of it because most of Sagittarius will remain forever under the horizon unless you live anywhere south of Paris.

Despite it all, Sagittarius is still a very interesting constellation, since it is located in the same direction as the centre of our galaxy. So when you are able to find it, you are looking towards the densest and richest part of the Milky Way. As a result, the area is teeming with interesting deep sky objects. “Deep sky objects” is the collective term for objects outside our solar system other than the stars. They are often much further away than the stars we can see. Although some of these objects are visible with the naked eye as hazy patches, most of them require binoculars or a (small) telescope to be able to see them well.

Deep sky objects can be classified in three major groups; nebulae, star clusters and galaxies. Nebulae are vast clouds of gas and dust in our galaxy and come in various different forms. There are reflecting or obscuring nebulae, which either reflect the light from nearby stars, or block it to form dark patches in the sky. There are also emission nebulae; these clouds actually emit light by means of fluorescence, which is caused by radiation from nearby stars, or stars that are hidden within. The latter are often regions where stars are born. Finally, there are so-called planetary nebulae. They are the shells of dust and gas thrown off a star at the end of its life. These nebulae tend to be relatively small and often round in shape.

Galaxies are the final and most distant group of deep sky objects, and are entire star systems like our own Milky Way. There are literally thousands of millions of galaxies strewn around the universe. We can see surprisingly few with the naked eye, but with even a small telescope you can see hundreds of them, mostly as dim, fuzzy, sometimes elongated patches of light.

Sagittarius contains examples of practically all of the aforementioned objects. Surprisingly so, because galaxies, for instance, tend to be difficult objects when looking towards denser parts of the Milky Way, simply because these galaxies lie well beyond it and are therefore often obscured by the gas and dust. Also, Globular clusters are normally found in the halo around our Milky Way, and not in it, but Sagittarius is host to no less than eight of those clusters which are well with in range of amateur telescopes. The most notable one is M22, which should be visible form our latitude, and potentially with the naked eye, but certainly with a pair of binoculars. 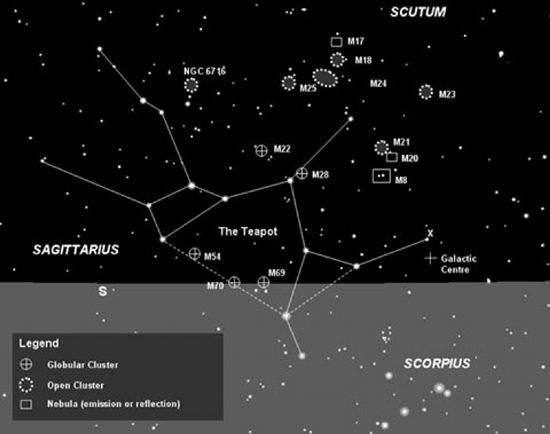 Above the Teapot, in the direction of Scutum, lies an area with numerous open star clusters. The biggest can easily be seen with the naked eye as bright knots in the glow of the Milky Way. Binoculars show stunning swarms of stars. M24 is not really a star cluster, but a very dense knot of stars in the Milky Way. M23 is the brightest and biggest of the real open clusters in the area.

From the nebulae in Sagittarius, M17, the Omega or Swan Nebula, M8 the Lagoon Nebula and M20 the Trifid Nebula are among the most Famous of all. They are all visible under good conditions with binoculars or modest amateur telescopes. M17 really has a shape of a Swan, but doesn’t appear to contain any stars. M8 is most definitely a star birth region. The nebula has an open star cluster NGC 6530 containing hundreds of stars. M20 also contains bright young stars at its centre. Larger instruments are needed to see any details such as the “lagoon” in M8 and the three dark lanes in M20.

If you want to complete your set of deep space objects in Sagittarius, a planetary nebula NGC 6818 and a galaxy NGC 6822 can both be found close together near the top of the constellation at the border with Aquila.