People often ask how it is possible to find anything in the myriad stars that can be seen from our regions on a clear dark night. The trick lies in using so called celestial signposts. Orion, the Hunter, is one of those signposts and ideally suited for finding most of the winter constellations in the southern skies.

Orion itself is a magnificent constellation which is easy to recognise. It can be found early in the evening in a south, south-westerly direction. Its shape is very distinctive and people rarely find it difficult to find. Look for a bright rectangle of stars with a line of three close bright stars right in the middle of it. The whole constellation is roughly a third of the way up in the sky. The top left hand star of the rectangle, Betelgeuse, is a distinct orange colour. The constellation is quite big and the rectangle spans, from top to bottom, about 30 moon diameters, or two closed fists at arms length. 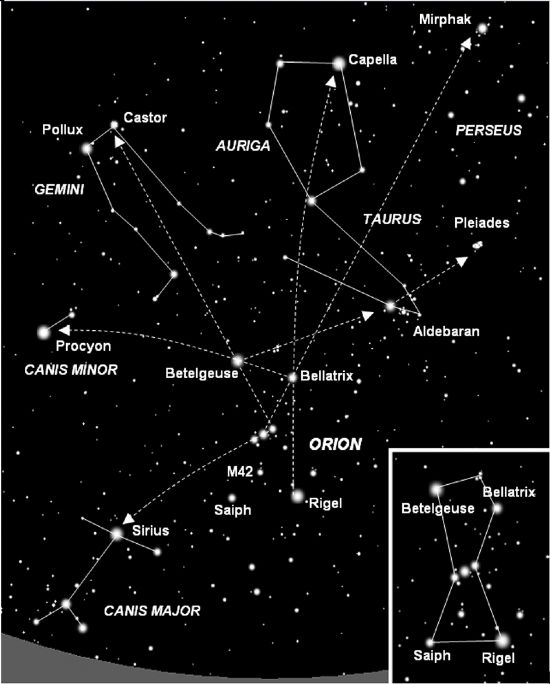 The inset in the diagram shows you the body of Orion and its four main stars. Saiph and Bellatrix are less bright than Betelgeuse and Rigel. The three stars in Orion’s “belt” are called, from left to right: Alnitak, Alnilam and Mintaka. Please also note the little group of three closely packed stars at the top of Orion. They may appear as one star with the naked eye but binoculars very clearly show you three individual stars. They are Phi 1, Phi 2 and Lambda Orionis.

Once you have positively identified the stars in Orion, you can now use these to find other constellations and stars around the sky. Let’s start with finding Sirius, the brightest star of all. Sirius and its constellation Canis Major, the Large Dog, can be found by following a line through the three belt stars from right to left and slightly down. Procyon in Canis Minor, the Lesser Dog, can be found by doing the same, but then follow a line from Bellatrix through Betelgeuse. Note that Betelgeuse and Procyon are about three times as far apart as Betelgeuse and Bellatrix.

If you’d like to know where Castor in Gemini, the Twins, is, you can follow a line from Mintaka in Orion’s belt through Betelgeuse. Castor is about three times that distance again. Pollux, the other bright star in the Twins is quite close to Castor, slightly below and to the left.

Go from Rigel through Bellatrix and find Capella in the constellation of Auriga. Auriga is a very distinct constellation consisting of a somewhat squeezed, but very recognisable, pentangle about the same size as Orion’s rectangle. Capella is the top right hand star of this Constellation which, at this time of the year, is almost directly overhead.

Aldebaran in Taurus can be found by going from Betelgeuse through Phi Orionis. Aldebaran is distinctly reddish and seems to form part of a triangular cluster of stars. This cluster is known as the Hyades. However, Aldebaran is not part of this cluster and is a lot closer to us. If you roughly follow the same route and slightly up the way, you will find the Pleiades, also known as the Seven Sisters, a similar type of cluster to the Hyades, but further away and more compact, so it looks a lot smaller.

The stars just below Orion’s rectangle form the constellation Lepus, the Hare, and for those who would like to try a long shot, if you take a route from Alnilam in Orion’s belt through Bellatrix, you will eventually arrive at Mirphak in Perseus. You can double check if you have found the correct star because it also follows a line with Capella and the Twins, Castor and Pollux.

The next time you are out at night and there is a clear sky, you will be able to impress your friends by pointing out some of these distant suns!