The Crab and The Winter Triangle

The Summer Triangle is well-known but there is also the Winter Triangle. This consists of Betelgeuse, Sirius and Procyon, and is now clearly visible in the early February sky. Procyon is the brightest star of the small constellation of Canis Minor (the little dog) and is easily located by taking a line east from Bellatrix to Betelgeuse. The constellation consists of only one other bright star, Beta Canis Minoris or Gomeisa. The little dog is associated with the hunter Actaeon, who was turned into a stag by the Moon-goddess Artemis as a punishment for seeing her naked. He was then devoured by his own dogs. Edmond Halley, of comet fame, in 1718 compared the positions of Procyon, Aldebaran, Arcturus and Sirius with old Greek and Arab star catalogues. To his surprise he found Procyon had moved a significant distance compared to the other stars in that time. He deduced this was due to the ‘proper motion’ of the star, rather than the actual movement of the earth, which would have been equal in all stars. Procyon is one of our nearest celestial neighbours, and is getting closer by 3km/s! It is the eighth brightest star in the heavens, seven times as a luminous as our Sun, and at magnitude 0.4, not greatly inferior to Rigel. Like Sirius, Procyon has a white dwarf companion – Procyon B. White dwarf stars are thought to be the remains of old stars which have exploded, leaving only a dense core. Procyon B has just over half the mass of the sun in only twice the volume of the earth. Its presence was deduced by the slight wobble in Procyon’s proper motion. Due to the nearby presence of its bright companion, it is only visible in large telescopes. 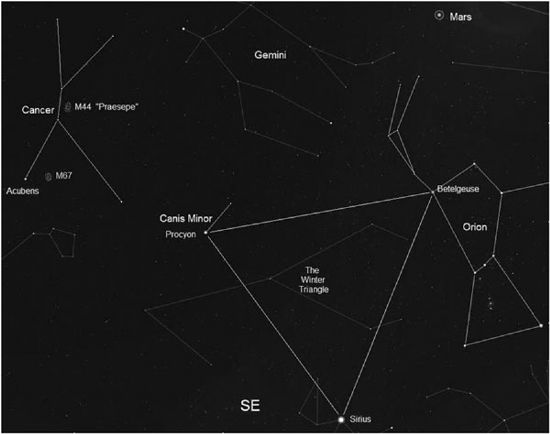 Lying to the northeast of Procyon is the constellation of Cancer-the Crab. According to Greek legend, Hera sent the giant crab to kill Hercules as revenge for his murder of her pet snake, but, as expected, the hero managed to crush it under his foot. As a reward for its courage, the Crab was placed in the heavens. Being so near the celestial equator, the constellation is visible from all inhabited parts of the earth and is a member of the zodiac. It seems to be closely associated with life and death. This area was known to the Greeks as ‘the Gate of Men’, where souls passed as they descended to Earth to enter human bodies. The constellation appears like a large dim inverted Y between Gemini and Leo.

Unlike Canis Minor, Cancer contains numerous interesting objects. At the centre of the Y, just visible to the naked eye is M44 or “Praesepe”. Second only to the Pleiades in brightness, this cluster has been known since ancient times. Other names include the Manger, the Little Cloud and the beautifully descriptive Beehive. Unlike the Greeks, the Chinese associated the area with death, as their name for the cluster can be translated as ‘the exhalation of piled up corpses’, perhaps likening the dusting of stars to sparks from a funeral pyre? It is at a distance of 525 light years (slightly further than the Pleiades) and has about 400 members in a region 15 light years across. It is better seen in binoculars than telescopes, as the wide angle views seen in the former can take in the entire cluster.

About 8 degrees south of M44 and west of Acubens (Alpha Cancri) lies another interesting object, the open cluster M67. This is just visible to the naked eye from dark skies. In binoculars it is an attractive, very rich cluster of faint stars. What makes this object remarkable is its extreme age. Astronomers assume stars in an open cluster are born out of the same cloud of material and hence the same age. Usually as a cluster ages its members are scattered by interactions with non-cluster stars, the group losing its compact identity as a result. M67, at a distance of 2,700 light years, and therefore being so far away from the main plane of the galaxy, has avoided this disruption and preserved its structure. Judging from the number of stars which have evolved into their ’red giant’ stage, we think it is between 5-10 billion years old: an OAP compared with the 20 million year old Pleiades. As far as open clusters go, only NGC 188 in Cepheus is known to be older.

There is a total eclipse of the Moon on Thursday 21st February, the first since 3rd March last year. This starts at 00.35am and lasts till 06.17am, though the full shadow is only visible between 3 and 4 am. As discussed last year, the darkness of an eclipse can vary tremendously, from an almost invisible grey/back to an intense reddish or coppery hue.

Both Venus and Mars are past their best, though still very obvious. Venus is still brilliant in the morning. Mars reaches its highest point in the sky due south in the evening sky, in the constellation of Taurus. It is rapidly moving away from earth. Saturn meanwhile is at opposition in Leo on the 24th February (the opposite part of the sky to the Sun) and therefore at its best. Note the colour difference between the slightly yellowish Saturn and the marginally brighter but white Regulus (alpha Leonis). The other bright gas giant, Jupiter, is low down in the southeast just before dawn, making it very difficult to see from the northern latitude of Inverness.

So an interesting month with something for everybody in the February sky!