The Bull ready to Lock Horns

Striding backwards along the ecliptic with the Pleiades sitting upon his back comes Taurus the Bull. Yet another sign of the Zodiac, it precedes Orion in the early evening, facing the mighty hunter and daring him to fight.

Taurus was a handsome white bull with horns of mother-of-pearl and a silver moon on his forehead. However, this was actually Zeus in one of his many disguises in order to seduce yet another beautiful young woman. This time it was the princess Europa whom he carried off on his back, riding the waves over the sea to Crete. Europa became the ruler of all the land she could see from the island and her realm eventually became known as Europe.

Europa gave birth to three sons: Minos, who became King of Crete; Sarpendon, who founded Miletus, a Greek city in Asia Minor; and Rhadamanthys, who became one of the three Judges of the Dead.

Only Taurus’ head and shoulders are represented in the sky and they resemble an extended ‘Y’ pattern on its side with the opening facing Orion. The head of the bull is formed by the Hyades, an open star cluster; his eye by the striking orange star, Aldebaran, and his long horns are tipped with the stars beta and Zeta Tauri.

Aldebaran is the 13th brightest star in the sky as well as the brightest star in Taurus. It is a true giant with a diameter 40 times that of our Sun and an absolute luminosity about 125 times greater. At 3400 C its surface temperature is low, reflecting its status as a dying star. It becomes swollen as it struggles to hold on to its outer layers as they cool and turn the star a burnished gold. 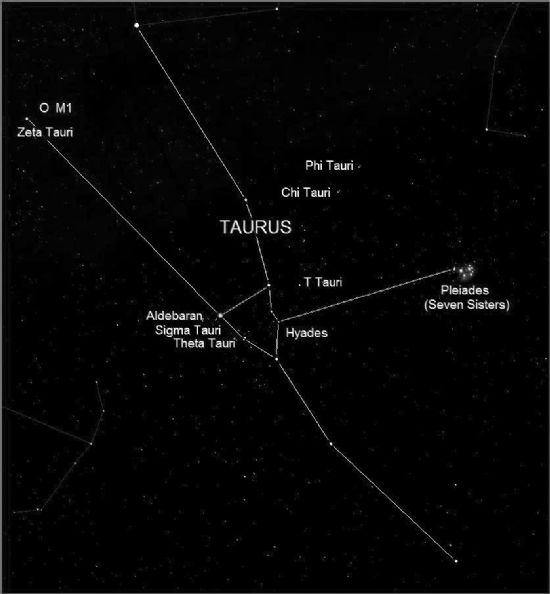 The Hyades, like the Pleiades, is an open star cluster but in contrast to the relatively young stars of the Seven Sisters the Hyades are considerably older at about 625 million years as opposed to 50 million years. There are about 200 stars in the group with most spread across 15 light years. At 150 light years from our Sun, the Hyades are the second closest cluster to us. Although Aldebaran appears to be part of the Hyades, it is in fact a foreground star and unrelated to the open cluster itself.

There are many double stars in Taurus. Theta is a naked eye and binocular double within the Hyades cluster consisting of two giant stars, one yellow and one white with magnitudes 3.8 and 3.4 respectively. Sigma is a wide binocular double with both stars blue-white in colour. A small telescope is required to resolve Phi Tauri into an orange giant and a white star, and chi Tauri into one blue and one gold star.

The tips of the bull’s horns are marked by blue giant stars and just to the north of zeta – the lower horn – lies one of the most well known objects in the night sky: M1 or the Crab Nebula. This fuzzy patch of nebulosity is the remains of a supernova, a massive star that exploded in 1054. It was recorded by the Chinese and may have been the inspiration for rock paintings left by Native Americans. At the centre of the Crab Nebula is a rapidly spinning pulsar but at magnitude 16 is too faint to be seen in amateur telescopes. However, the wispy remains of the explosion are visible in telescopes of 80mm or more of aperture but the object tends to be quite faint and disappointing to view.

The variable star, T. Tauri, is the prototype of a class of variable stars – baby stars which are in the process of forming but whose temperatures are still too low for hydrogen fusion to occur. They will continue to contract under gravity until the core temperature rises high enough for hydrogen burning to take place. In the meantime, they remain associated with the gas cloud of their birth, shining brightly in the infrared as they heat the dust within the cloud surrounding them. After about a million years these young stars produce a strong solar wind from each pole blowing away most of the dust and gas and leaving behind a circumstellar disc from which planets may well be forming. By studying these stars astronomers hope to understand how our Sun developed as it is thought that all stars follow a particular evolutionary sequence which depends on their mass.

The realisation that there are other planets forming out in space means there may be life elsewhere in the universe and that we are not unique. The chance of us meeting another life form is slim considering the vast distances over which they have to travel – unless there is a way of travelling faster than the speed of light.

Taurus provides a snapshot of stellar evolution from stars still in the womb to the ghosts of stars which exploded long ago. Wander through the Bull at your leisure and enjoy the celestial sights.