It’s a sure sign that winter’s here when Orion’s familiar shape takes command of the southern sky. Tailing along behind and below him, separated by a Unicorn minding his own business, are his two dogs, Canis Major and Canis Minor. Legend is unclear as to whether the dogs are assisting Orion in fighting Taurus, or are more interested in chasing Lepus, the hare underneath Orion.

In contrast to the magnificent objects in Orion, Canis Minor, the Lesser Dog, is unremarkable and devoid of deep sky objects. A line extended eastwards through the two top stars in Orion will bring you to Procyon, the first magnitude star of the constellation. 7 times brighter than our Sun, its relatively close distance of 11.4 light years helps in making it the 8th brightest star. Procyon is also known as Antecanis, which means ‘before the dog’, referring to the rising of its sibling, Canis Major. 2.9 magnitude beta, or Gomeisa, ‘the bleary-eyed’, completes the picture of this constellation.

Canis Major, the Greater Dog, is noteworthy because it contains the real jewel of the sky, the star Sirius. At magnitude -1.46 it is, by far, the brightest star in the night sky. Easy to find, apart from its obvious brilliance, by following a line eastwards through the three belt stars in Orion. Twice as large as our Sun, it is also the 6th nearest star to us at a neighbourly 8.6 light years. It is, in fact, a pure white star, but atmospheric conditions and its proximity to the horizon cause the rapid rainbow scintillations we enjoy. Sirius is a binary and its Earth sized, white dwarf companion is called, appropriately, ‘The Pup’. Notoriously difficult to view because of Sirius’ proximity and brilliance, legend has it that a primitive African tribe, the Dogon of Mali, worshipped Sirius ‘B’ long before the west discovered it.

Sirius, the ‘Dog Star’, was of great importance to the ancients and its first rising marked New Year for the Egyptians and the Athenians, and the annual flooding of the Nile, bringing fresh growth to the fields. Egyptian temples as far back as 8,000 years were aligned to Sirius’ rising. In summer, the Sun moves into the area of Sirius and the ancients believed that Sirius added to the heat of the Sun, leading to the sultry period of 20 days on either side of their conjunction being called the ‘Dog Days’ – a phrase still with us today. 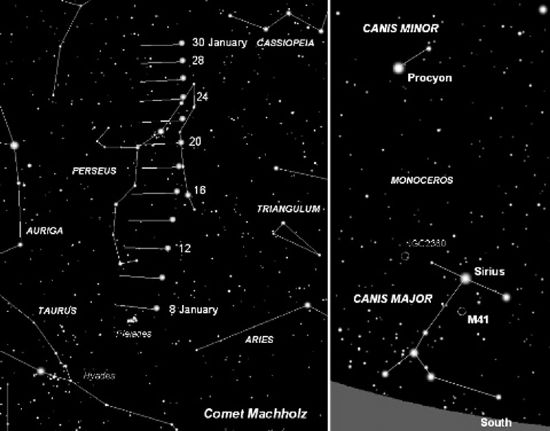 Our latitude severely limits visibility of objects in Canis Major as it lies so close to the horizon. Deep sky objects to try for are M41, an open cluster of around 100 stars, including some red giants, with 50 or so visible in binoculars, and NGC2360, an open cluster showing nice lines of stars, especially with larger apertures.

Above Procyon is the planet Saturn, yellowish and not usually twinkling. The Cassini spacecraft is currently in orbit around it and sending back stunning photographs. Despite two close passes of the largest moon, Titan, little is known about this enigma due to its opaque, nitrogen rich, and smoggy atmosphere. Scientists speculate it may have oceans of liquid hydrocarbons, whilst others expect a solid icy surface. The mystery may be solved when the European Space Agency’s Huygens probe, released from the Cassini mothership on 25th December, starts a two and a half hour descent through Titan’s atmosphere on the 14th, during which it will analyse and photograph its surroundings. If a soft landing is accomplished, it will continue to transmit data for a further two hours. Fortunately, more time, money and planning was available to this mission than the ill-fated Beagle 11. Fingers crossed.

In the skies this month is an unexpected treat: Comet Machholz 2004 Q2 is already at naked eye visibility from a dark site and is a very easy object to spot in even small binoculars. The chart shows its position during January. On the 7th its tail should just be brushing the Pleiades cluster. Discovered in August last year, it is the 10th comet amateur Don Machholz has found. Four of his discoveries were made using nothing more than 15x80 binoculars!