An Engagement With The Pole Star

Polaris, the Pole Star, has been often misrepresented in modern culture. It has been referred to as either the brightest star or the most unmoving one many times in poetry or song lyrics. While technically neither of these statements is true, you can see how they may be thought to be so.

Polaris resides at a point in the sky that is very close to the North Celestial Pole, hence its title of ‘Pole Star’. If you were to stand at Earth’s north pole, Polaris would be directly overhead, and so it represents a point in the sky around which all the other stars and constellations in the northern sky rotate. Non-polar observers can work out their latitude by measuring how many degrees above the horizon Polaris lies. From Inverness, that is a tad over 57 degrees.

For astronomers, Polaris is important for a number of reasons. Because of its position at the celestial pole, and the fact that all else in the sky rotates around it, it proves very useful for aligning ‘Equatorial’ telescope mountings. The observer will carefully align their mount so that one of its axes of rotation is pointing directly at Polaris, and then when observing any object in the northern sky the telescope can be locked on target and driven around that axis to track the target continuously, making it very easy for the observer to keep their attention on the object under scrutiny and make their observations.

This rotation around the pole can be demonstrated using a camera. Simply use a wide-angle lens and mount the camera so that it is pointing towards Polaris. Make sure you are in a dark location and that there is no Moon. Open the shutter for 15 minutes or so. The picture you get will show Polaris as a bright spot in the middle, and around it will be coloured arcs known as star trails, showing how the other stars have swung around Polaris.

The title of Pole Star is a temporary one though. While it is convenient that a relatively bright 2nd magnitude star sits so handily near the celestial pole, it is not a permanent fixture. Because of a ‘wobble’ in the Earths axis of rotation, the point that represents the north celestial pole actually wanders around the sky, tracing a considerable sized circle among the stars. Actually, Polaris currently sits about 0.7 degrees away from the true pole position, and is gradually getting closer. In 2100 that separation will be just less than half a degree, but it will then gradually draw away over thousands of years, until about the year 14,000 when Vega, the brightest star in the constellation Lyra, will be our Pole Star.

So Polaris is not unmoving, but is it the brightest shining star? No, but it does lie in a somewhat sparsely lit part of the sky, making its apparent brightness stand out all the more. It is easy to find too, as the two stars Dubhe and Merak in the Big Dipper asterism point directly at it. It is also a Cepheid Variable star, which varies slightly in brightness between magnitude 1.92 to 2.07 every 3days 23hours 16mins and 28.8secs. 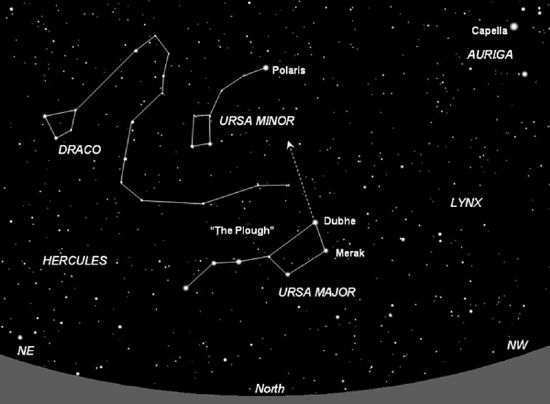 Polaris is part of the constellation Ursa Minor or the Little Bear, which is close in the sky to its larger ursine counterpart, Ursa Major. The Little Bear consists mostly of the asterism that marks out the little dipper shape.

As well as providing a convenient reference point to the North Celestial Pole, Polaris is quite a beautiful star to observe in its own right. It appears slightly golden-hued, and has a fainter companion star that is visible in small telescopes. It can be a good test of sky conditions to see if the 9th magnitude star is observable. Because Polaris is so high in the sky, it is well away from all the air turbulence that can affect objects lower down, and so the view is usually clear and sharp. As Polaris is actually a trinary system, consisting of three stars orbiting each other, there is a second companion star that we are not able to see from Earth. It is too close in to Polaris and is swamped by the glare from the brighter body.

Binocular observers, or those lucky enough to be able to achieve wide fields of view with their telescopes, have another bonus when viewing Polaris. At low magnifications, Polaris appears to be the bright star in a rough circle of fainter ones, and it is quite easy to imagine it as the gemstone in a ring. This asterism has come to be known as the Engagement Ring, although if you look carefully you can see that the ring has a little dent in it opposite the bright stone – perhaps it was thrown away in rejection? At least it is still there in the sky for us all to enjoy, a (temporary) promise of union between the Pole Star - Polaris, and Earth-bound astronomers.