Last month in Seeing Stars, I introduced the novice stargazer with a telescope to some of the highlights of Orion. Orion is a great winter constellation and is perfect to start observing with a new telescope, but there is plenty more to keep experienced observers (and armchair astronomers) busy too.

I mentioned that much of the constellation of Orion is contained in an area 1,600 light-years away known as the Great Orion Cloud – a mass of interstellar dust and gas that contains many different areas of star-birth, and emission and reflection nebulae galore. If you look at long exposure photographs of the entire constellation, you may notice a large reddish glow to the left-hand side, that stretches upward in a long curve, almost as long as the height of Orion’s ‘body’. This glow is Barnard’s Loop. Though it shows up well in photographs, the loop is quite difficult to see visually. You will need a very dark sky site and eyes that are completely dark-adapted. That is, you should have allowed them to adjust to true darkness for over half an hour in order to let the faintest wisps of starlight register on your photoreceptors. Even then you may not see it, but you will stand a fair chance.

The glow is thought to come from ionised hydrogen (i.e. hydrogen that has lost its electron and is now positively charged) inside a gigantic bubble, many light-years across, that also contains something known as the OB1 Association. No, that’s nothing to do with a Jedi Knight fan-club, but is actually a group of young hot stars of spectral types O and B. Different stars have different spectral types depending on their chemical makeup, temperature, mass etc. These particular stars are burning so hotly that their energy is ionising some of the hydrogen in the very low-density bubble of interstellar gas around them, resulting in the diffuse glow. For visual astronomers Barnard’s Loop is a rare and elusive sight, but quite impressive nonetheless when you think about the physical processes that cause it to exist.

The emission and reflection nebulae discussed last month were good examples of “clouds” of interstellar material (“nebula” comes from the Greek for “cloud”) being caused to glow by stellar activity, but there are many different types of object to look for in Orion. For starters, two of the brightest stars in the winter sky, Rigel and Betelgeuse, are contained therein and show contrasting stages of stellar evolution. 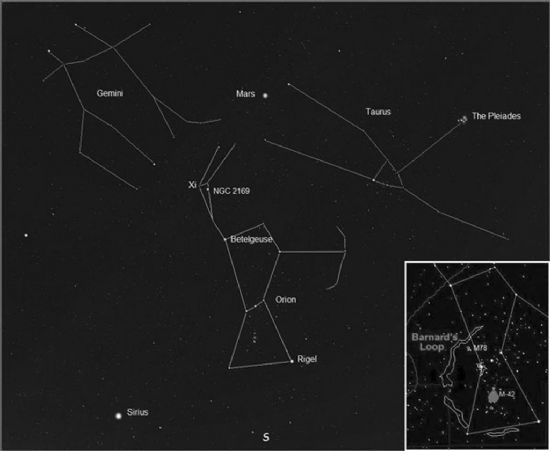 Rigel is a blue-white supergiant that represents Orion’s left foot. On clear frosty nights the stark brilliant whiteness is very apparent, and stands out in obvious contrast to the star diametrically opposite it in the constellation, Orion’s right shoulder star – Betelgeuse. Rigel is a very large star pouring forth vast amounts of energy as it burns away its fuel. At visual magnitude 0.12 it is the sixth brightest star in the sky, but even so it is still a star that is slowly dying.

Betelgeuse is also on its way out, but it differs somewhat from Rigel. This is a fascinating star, and shines with a bright red hue. Its visual magnitude varies from 0.2 to 1.5, over periods from six months to six years. This makes it a semiregular variable red supergiant! Quite a title, and Betelgeuse lives up to it. If the star were situated where our Sun is, the orbits of the planets Mercury, Venus, Earth and Mars would all be engulfed by its mass, and it would extend well on its way towards Jupiter too! Its supergiant nature means that like Rigel, it too started off with a mass more than ten times that of our Sun, and has burned its entire store of hydrogen. Now burning helium, Betelgeuse has expanded so that it has become immense, its outer layers registering a relatively cool temperature of 3600Kelvins.

There is some debate as to Betelgeuse’s fate. It is generally agreed that it will follow a predicted supergiant pattern. This would involve depleting its supply of helium and then fusing heavier and heavier elements until all possible fuel is exhausted and then ultimately destroying itself in a type II Supernova explosion - one of the most powerful events in the universe – a fate which Rigel may share.

Some experts say this will happen within the next thousand years, some say much further into the future. For many years it was a matter of some worry that Betelgeuse’s relatively close proximity to Earth would result in lethal effects here, but it is now generally agreed that its distance of more than four hundred light-years will prevent any fatal side-effects. Although, it is suggested that if one of Betelgeuse’s poles was pointing towards Earth at the time of the explosion, the gamma rays that would be projected along that path could have significant effects on Earth’s ozone layer! Regardless of the star’s orientation when it blows, it will brighten to rival a crescent moon, visible in daylight, and could be bright enough to cast shadows for up to several months before gradually fading.

As far as the amateur astronomer with a telescope is concerned, these two stars are quite interesting to observe. Betelgeuse’s visual magnitude can be estimated with reference to nearby stars of constant brightness, and the results plotted over time to show a pattern of how the star is increasing and decreasing in brightness. Rigel on the other hand is a multiple star, and its main companion shines at magnitude 6.7 at a close apparent distance of only 9 arc seconds from Rigel itself. This makes it quite a challenging double to separate, as the glare from Rigel’s brightness can overwhelm the more subtle appearance of the companion. Nevertheless, a steady sky and good (even small aperture) optics can reveal this stunning double.

A different type of view is that offered by an often-overlooked open cluster of stars, designated NGC 2169. The cluster lies close to the star Xi Orionis, which represents Orion’s upraised hand, and it contains two distinct groups of stars, each comprising a couple of handfuls of moderately bright stars. What is most interesting about this cluster is the way the stars are laid out in it. The two groupings look remarkably like the figures “3” and “7”, which explains why the cluster is often referred to as “The 37 Cluster”! Note that some imagination may be applied to see this effect, as telescopes that use a diagonal to hold the eyepiece (refractors, Maksutovs and Schmidt-Cassegrains) will ‘flip’ the view horizontally so the numbers will appear back to front. If your telescope uses a diagonal, try removing it and then refocusing with the eyepiece in ‘straight-through’ mode and you should see the effect immediately!

The 37 cluster is not one of Orion’s most obvious treasures, but it can easily be found with a little patience and is an unusual view. It just shows that Orion offers a little of everything, for beginners and seasoned observers alike.