Worlds Above the World We Know

In the deep and distant depths of our galaxy lie strange and exotic worlds orbiting other stars. We may look upwards at the bright lights of familiar constellations but how often do we think about other planets tied to the gravitational hug of their parent suns.

To date, over 400 extrasolar planets have been found, mostly through indirect means because they are incredibly faint – usually less than a millionth of the intensity of their parent star for they shine only by reflected light – so they cannot be imaged directly. There are various ways to detect them however, and the most commonly used methods are: observing a movement of the star, discerning a change in the star’s brightness or noting any displacement in the star’s spectral lines due to the Doppler effect. (As the star moves forwards or backwards along the line of sight, due to the pull of an orbiting planet, the spectral lines will shift towards the red or blue end of the spectrum – this is known as the Doppler effect). The latter method is the most successful having found the majority of extrasolar planets so far.

HARPS (High Accuracy Radial velocity Planet Searcher) uses the Doppler effect. It is an incredibly precise instrument attached to a 3.6 m telescope in Chile and since it began work in 2003 has found numerous extrasolar planets. Another ground-based telescope called the Advanced Planet Finder was due to come online last year but may be delayed until funding can be secured.

Two space missions have been launched specifically to find other worlds and should add to the discoveries made thus far by ground-based telescopes. COROT (COnvection ROtation and planetary Transits) lifted-off in December 2006 and has so far found seven extrasolar planets. Kepler was launched in March 2009 with a NASA space telescope designed to find Earth-like planets by monitoring the brightness of over 100,000 stars; any changes may be due to a planet passing in front of its parent star.

In 1992, the first extrasolar planets were discovered. No one expected planets to orbit a pulsar so this was a great surprise. Then in 1995 after observing the spectral lines of 51 Pegasi, a star in the constellation of Pegasus, the first extrasolar planet orbiting an ordinary star was found. It turned out to be a gas giant like Jupiter and up to now most extrasolar planets detected have been gas giants simply because they are easier to spot. As time has gone on, detection methods have been refined and astronomers are gradually finding smaller worlds including ice giants similar to Neptune and even a small number of terrestrial sized planets just a few times larger than the Earth.

The first ‘super-Earth’ (defined as a terrestrial planet of one to ten Earth masses) to be found around a main sequence star was discovered in 2005. It has a mass seven and a half times the mass of the Earth and orbits its parent star in just two days. Even though this star is cooler than our Sun, the planet is still too close for water to exist on its surface. However, in 2007, the first serious ‘waterworld’ candidate was detected orbiting another cool red dwarf star (Gliese 581). This super-Earth is about seven times the mass of the Earth and is located at a distance where water could be liquid i.e. within the habitable zone. Then in April 2009, the smallest super-Earth at just 1.9 times the mass of the Earth was discovered orbiting the same star.

Most extrasolar planets are not only large – often far larger than Jupiter – but also orbit very close to their parent stars and are known as ‘hot Jupiters’. In addition, some have very eccentric orbits. These findings make astronomers question whether these planetary systems are the norm and that perhaps it is our solar system that is unusual.

Recently however, a few stars have been found to have planetary systems more similar to our own. For example in the constellation of Aquarius there is the star Gliese 876. It is a red dwarf star about 15 light-years from Earth. So far, three orbiting planets have been detected: two are about the size of Jupiter whereas the innermost one is the first super-Earth mentioned above. 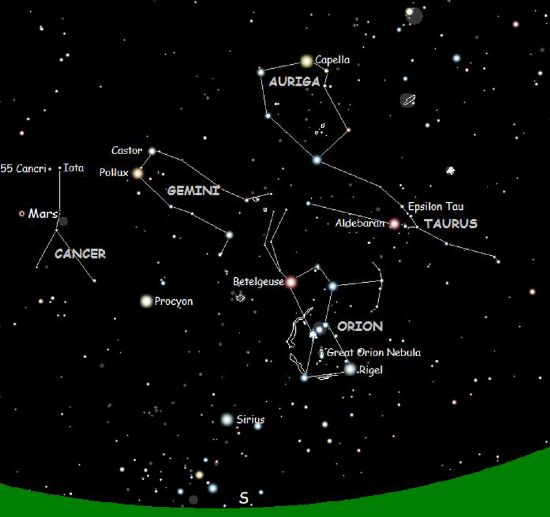 55 Cancri is a binary star consisting of a yellow star (like our Sun) and a red dwarf star located in the constellation of Cancer about 41 light years away. It has now been confirmed that five planets orbit the yellow star and to date this is the only extrasolar planetary system that has such a large number of planets – apart from our own of course. Perhaps what is surprising is that a solar system can survive in a binary star system without being gravitationally disrupted.

If you go outside around 9.00pm in the evening, Cancer can be seen on the eastern horizon. Just to the left of the star Iota is 55 Cancri, faint at mag 6, making it only just visible to the naked eye from a very dark site. Now look westwards and you will come across Gemini. The bright star Pollux has an extrasolar planet comparable to Jupiter. Continue westwards until you come to Taurus. Epsilon Tau has a gas giant that is seven times as big as Jupiter. Even the brightest star, Aldebaran, may have a Jupiter sized planet although this is not yet confirmed.

Move south and you will find the distinctive constellation of Orion, the only constellation in the northern hemisphere with a naked eye view of a stellar nursery. Within the Hunter’s sword is the Great Orion Nebula where discs of dust and gas surround some of the extremely hot and very young stars; these are planetary systems in the making. Unfortunately it is unlikely any embryonic planets will survive let alone develop life because of the energetic radiation emitted by the cries of these baby stars.

Extrasolar planets and protoplanetary discs have been discovered encircling many of the stars we see in the night sky. So every time you glance upwards, think about those worlds that forever dance to the tune of their parent star’s gravity. Perhaps some of them will have intelligent life studying us as we investigate them.