An Electric Light Show in the Sky

Have you ever looked up at the sky at one o’clock in the morning on a clear summer’s night? At this time of year the sun doesn’t sink lower than 6-12 degrees below the horizon and the light has a beautiful, ethereal quality, so unexpected for the wee, small hours of the morning.

It’s also at this time of year that it is possible to see some very strange, yet quite exquisite, clouds on the northeast to northwest horizon. Electric blue in colour, these Noctilucent Clouds can form fine swathes of delicate filaments that cross the sky, still bright from the sun just skimming the edge of the Earth.

Noctilucent means ‘night-shining’ and these ‘clouds’ are visible due to the reflection of sunlight. They can be seen during the summer months from about mid-May to mid-August in the northern hemisphere but can only be observed from a specific latitudinal zone of about 50 – 65 degrees north (or south if in the southern hemisphere), with 57 degrees being the best latitude for their observation. This is the latitude of Inverness, so we are fortunate to be in exactly the right place to enjoy the very best views of Noctilucent Clouds. 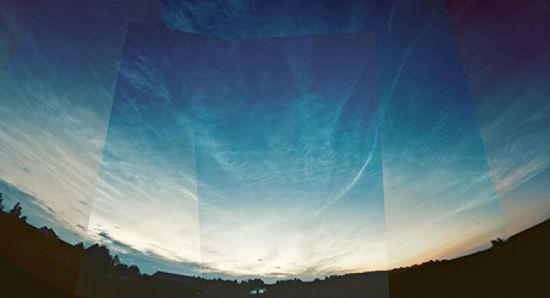 They are incredibly thin and can be difficult to see. Some are so faint they are almost unrecognisable, whereas others form definite shining tendrils, interwoven with blue. They form at an immense height: 80 km to 85 km up in the mesosphere, compared with the familiar weather clouds we see too often, which form in the troposphere up to a few km above the surface.

Once seen they are never forgotten, although initially it can be difficult to determine whether these diaphanous structures really are Noctilucent Clouds or simply ordinary weather clouds.

Although Noctilucent Clouds should be visible frequently over the summer months, actually spotting them can be quite difficult. They may be too faint to observe, it may be cloudy or simply too bright if observing takes place outside the hours of darkest time.

No one is certain how they develop. They consist of tiny ice crystals the size of smoke particles that freeze around dust particles found in the mesosphere. How ice crystals form in the cold dry air of the mesosphere, where the temperature is about -125 degrees C, is one of the great mysteries of Noctilucent Cloud formation.

They have been observed with increasing frequency and further south than they once were. It has been suggested that this is due to the effects of global warming caused by increasing manmade pollutants, which actually lower temperatures in the upper layers of our atmosphere.

If no Noctilucent Clouds are present, do not worry. Turn around and face south. You should see a dazzling point of light; this is Jupiter, the largest planet in our solar system. It appears quite low in the sky but is unmistakable. Above it and a little to the right you may spot a reddish star; this is Arcturus, a red giant.

Not many other stars are visible at this time of year but three which make their mark are: Vega in Lyra, Deneb in Cygnus and Altair in Aquilla. These bright stars form the Summer Triangle and can be seen high overhead all summer long shining through the twilight of the night sky.

The name ‘Summer Triangle’ was popularised by Sir Patrick Moore on the BBC Sky at Night programme in the 1950’s, but it seems the asterism was recognised before then. Austrian astronomer Oswald Thomas refers to the triangle as the Great Triangle in the late 1920s, and even in the 19th century it was called the Conspicuous Triangle by J J Littrow in his star atlas.

Vega is the brightest star and appears nearly directly above as a brilliant bluish-white point of light. Deneb lies to the east of Vega and is not quite as stunning. Altair’s brightness lies between the two, and forms the most distant point of this triad. In the spaces between these stars are many deep sky objects that can be seen with a small telescope. They will be hidden from us in the light nights of summer, but will be revealed once autumn comes around and the night sky again begins to darken.

While we wait for that, enjoy the variety of celestial splendours offered by the Highland summer sky. It’s not everywhere that you can see strange unearthly clouds, the largest planet in our neighbourhood, and the brighter marker stars of three great summer constellations all in one night. These are certainly worth staying up late for.