Our Sun contains about 99.8% of the total mass of the solar system. It is extremely large and could easily contain one million Earths. It is incredibly hot with a temperature of 5,500 degrees C at its ‘surface’ and perhaps 15 million degrees C in its centre. These blistering temperatures make it possible for nuclear fusion reactions to occur, producing the energy required to power the Sun and providing us with heat and light. In this way, our Sun gives us life. 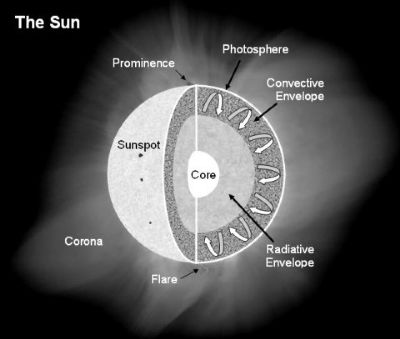 The ‘surface’ of the Sun is called the photosphere although it is not a true surface since the Sun is composed of boiling, billowing gas in a highly energised state known as plasma. Photographs taken by through special solar telescopes reveal convection currents constantly bringing gas upwards like the bubbles in a saucepan of boiling water.

Peppering the surface are dark sunspots, which are cooler areas where powerful magnetic field lines poke out of the photosphere and form loops of electromagnetic force. These are the active regions on the Sun and are places where solar flares (powerful explosions) and coronal mass ejections (bubbles of gas that are blasted outwards from the Sun) arise. Coronal mass ejections can expel billions of tons of charged particles which shoot off into space at millions of miles an hour. If these particles head for the Earth, they can cause all sorts of damage to our orbiting satellites, our energy grids and even astronauts but they can also give rise to the most beautiful lightshow on Earth – the aurora.

The Sun moves through an eleven-year cycle, oscillating between high and low numbers of sunspots. At the present time we are at sunspot minimum so the Sun is relatively quiet. However, over the next five years sunspot numbers will increase and the Sun will start throwing more high-energy particles our way. Fortunately, the Earth’s magnetic field acts like a force field, shielding us from the dangers of the Sun’s radiation.

The interaction of the high-energy particles, which constantly stream away from the Sun, with the Earth’s magnetosphere is known as Spaceweather.

Spaceweather is now seen as a useful and increasingly important tool for astronomers. By shutting down vital parts of a satellite it is far less likely to be damaged during a solar storm and astronauts can be warned to take shelter in specially designed protective areas of the International Space Station. Such solar storms are now recognised as one of the hazards posed for astronauts going to Mars. The journey alone could take about six months and will require shielding of at least part of the space vehicle. Once they are on the planet’s surface, any habitat they build will have to be completely safeguarded against radiation because Mars does not have a magnetic field to offer protection.

Radiation can also come from outer space. Cosmic rays are high-energy particles just like those streaming from the Sun and can be seen by astronauts as flashes in their eyes. They are thought to increase the incidence of cataracts in the eye and possibly damage to the retina. In addition, radiation from any source will increase the chances of developing cancer.

The Sun also produces X-rays and ultraviolet radiation. X-rays are filtered out by the Earth’s atmosphere and most of the ultraviolet radiation is absorbed by the ozone layer. In 1985 an ozone hole was discovered over Antarctica and this has been growing in size ever since. Caused by chlorofluorocarbons (CFCs) being released into the Earth’s atmosphere by man, it was decided by nations worldwide to phase out CFC production, and in 2003 the depletion of the ozone layer appeared to be slowing down. It is the ultraviolet light that gives us a tan although at the same time it damages the DNA in our cells and can ultimately give rise to skin cancer. Without the ozone layer, biological life-forms would not be able to survive unless they lived under water, and it was only when the ozone layer was formed early in our planet’s history that life was able to venture onto dry land.

Yet the Sun gives us life. It is at the start of almost every food chain on Earth and provides the energy, in the form of light, to be passed from one organism to another in a complex network. In addition it provides us with heat – just enough in our position in the solar system to allow water to exist in liquid form, and water is recognised as being vital to life as we know it.

So the Sun is an unimaginably powerful primal force, capable of both destructive and creative influence in equal measure. The many questions about our very special local star, one of the most fascinating objects we can observe, are only now beginning to be answered by the numerous space telescopes dedicated to that purpose.

WARNING! Viewing the Sun can be highly dangerous! Even looking at it with the naked eye can damage your eyesight. Using unfiltered binoculars or telescopes will permanently damage eyesight or cause blindness in a fraction of a second. Specialised filters are the only safe way to observe with these instruments. If you wish to observe the Sun please contact the Highlands Astronomical Society.