Robotic spacecraft are tough. Their life expectancy is accepted as being short and yet most outperform their design capability, exceed all expectations and manage to return enormous amounts of data keeping scientists happy for many years.

Spirit and Opportunity, the two Mars rovers, began exploring the red planet six and a half years ago. They were supposed to last only three months before their solar panels became covered in Martian dust which would reduce and eventually terminate their power source. Yet, due to a quirk of fate, the strong winds whipped up on the surface every so often have kept the panels clean and allowed the continuing operation of these plucky little spacecraft. 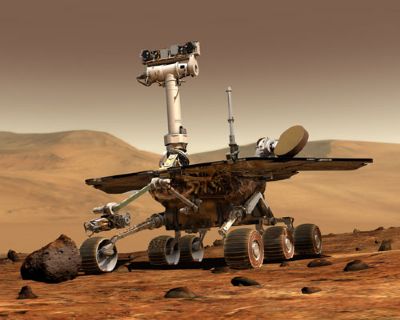 In the time since they touched down on the planet’s rusty surface evidence that water once existed on the surface still comes flooding in. Most significant this year is the discovery of a substantial deposit of carbonate in a rocky outcrop which shows that conditions for life could, at one time, have been favourable in this area. Unfortunately Spirit is now trapped in sand and can no longer travel whereas Opportunity moves onwards to its next target – a large crater called Endeavour.

Pioneer 10 was launched in 1972. Originally designed for a 21-month mission it lasted more than 30 years. It was the first spacecraft to travel through the asteroid belt, observe Jupiter, taking colour photographs of the planet, and eventually investigate the outer regions of our solar system until its final, extremely weak signal was received on January 23rd 2003 when it was 12 billion km from Earth.

Pioneer 11 was launched shortly after Pioneer 10. It also examined Jupiter and was the first to study Saturn. At the time scientists were unsure whether it was possible to survive a pass through Saturn’s ring plane and it was important to assess what damage could occur before the Voyager spacecraft arrived and, if necessary, reroute them away from danger. The last contact with Pioneer 11 was in November 1995.

In July of this year, Voyagers 1 and 2 will have been operating continually for nearly 33 years from the time they were launched in September and August 1977 respectively. Their main mission was to gather information about the outer planets; both visited Jupiter and Saturn but Voyager 2 went on to study Uranus and Neptune. Currently they are returning data about the properties of the solar wind and its interaction with interstellar winds in the heliosheath (the outermost layer of the huge bubble that surrounds the solar system generated by our Sun and which protects us from galactic cosmic rays).

It seems that the solar system is passing through an interstellar cloud (nicknamed ‘Local Fluff’) that modern physics says shouldn’t exist. However, data from the Voyagers solved this conundrum at the end of 2009 by indicating the existence of a strong magnetic field just outside the solar system and it is this that holds the interstellar cloud together preventing it from being crushed by a high-pressure supernova gas that surrounds the Local Fluff.

A spacecraft designed to last long enough to return to earth with asteroid dust on board arrived home last month despite many problems along the way. This is a story about survival rather than a vehicle exceeding its design lifetime. It is still remarkable though and shows how well they are engineered and how the scientists back home are able to create the solutions to pull them back from the black hole of death.

The Hayabusa spacecraft was launched in 2003 in order to visit Itokawa, a potato-shaped asteroid, where it was to land, take a sample of the dusty surface and return to Earth. Unfortunately, due to a series of technical problems, its return was delayed by three years.

Soon after its launch in 2003, the solar cells were damaged by a large solar flare that reduced the efficiency of the ion engines and delayed its arrival. In 2005, the two reaction wheels, which determine attitude movement, failed resulting in an alteration of the mission plan. Late in 2005, a landing rehearsal failed and had to be rescheduled. The release of the miniprobe, which was to take photos of the surface, also failed shortly afterwards.

There was confusion as to whether Hayabusa actually landed on the surface because the high-gain antenna could not be used at the point of touchdown although later data suggested this had been successful. Unfortunately, a sampling device didn’t work although, since plenty of dust would have been kicked up during the landing, it was thought some would have entered the sample canister.

The spacecraft then entered safe mode until control and communication could be re-established but there was still a continuing problem with the craft’s reaction control system. Then there was a power failure when trying to correct its attitude and it began drifting. This was rectified by using propellant from the ion engines but then all communication with Hayabusa was lost when there was a sudden attitude change caused by a fuel leakage. After a nail biting wait to see whether its position would eventually stabilise, communication was restored.

Then came the long limp home on two of the four ion engines and only seven out of the eleven batteries working. During the return journey, the non-working ion engines were re-ignited although one again failed later and two of the others had to be combined to generate the change in velocity required to get Hayabusa home. After various correction manoeuvres, the spacecraft entered the Earth’s atmosphere and released the re-entry capsule where it landed in the Australian outback on the 13th June.

Against all the odds many spacecraft keep going whether it is the time they last or the difficulties that are overcome due to the amazing solutions the scientists and engineers come up with – think also of Apollo 13. This is how we are able to learn so much about the our little bit of the Universe.