The Death of Stars

There is one universal truth that we all recognise: all things that begin must end. Last month’s article was about how stars, the largest single objects in the universe, come into being, and so this month’s Seeing Stars is about how their lives come to an end.

There are different sizes of star, and the size of each one will determine how it ends its life. Our Sun is a main sequence star- an ‘average’ star if you like. Others may be smaller or larger to some extent, but some are very much larger and more massive.

An ‘average’ star like ours takes many billions of years to use up its fuel of hydrogen. The Sun is nearly halfway through its estimated 10bn year lifespan, and when the hydrogen in its core is all gone, it will start to fuse helium and will contract while its outer layers cool and expand, increasing the diameter of the star many times over. The star is now a red giant. Eventually most of the helium in the core will be fused into heavier elements, such as carbon and oxygen, which the star will then burn off. Once all the usable fuel is depleted, nuclear reactions cease.

The outer layers of the star will be expelled into space, forming one of the most beautiful objects in the night sky: planetary nebulae. The star’s core will eventually shrink down to a diameter of a few thousand miles, and a mere teaspoonful of its material will weigh as much as an elephant. At this point it is known as a white dwarf, but once it loses all its remaining heat to space it will be a black dwarf, and is essentially dead. Although, optimistic romantics suggest it may still be worth a visit, as highly compressed carbon potentially produces- diamonds! 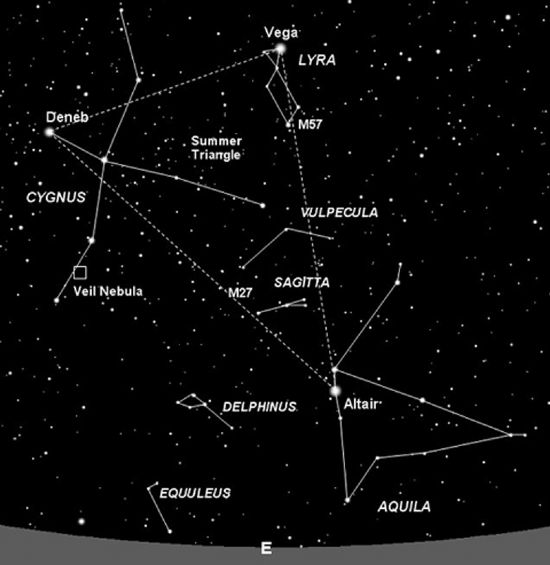 It is said that the light that burns twice as bright burns half as long, and there is some truth in that when applied to the lives of the stars. Large stars use their fuel much more quickly as they shine much more brightly, and their lives pass in only a few million years as opposed to billions for smaller stars. Good examples of large stars are Spica in Virgo, Vega in Lyra, and Sirius in Canis Major. When the hydrogen runs out, the star uses whatever fuel sources it has produced in its hydrogen-burning stage to keep on providing energy. At various stages then, it will fuse helium, carbon, oxygen and then silicon, shedding layers and expanding as it goes, becoming a supergiant. Deneb, visible in the summer constellation of Cygnus is a good, and easy to find example.

Eventually only an iron core is left which cannot produce any energy by fusion. With no energy being radiated outwards to balance the inward pull of gravity, the core contracts until it reaches a specific mass, at which point it suddenly contracts even further – to the size of only a few city blocks – and heats up to hundreds of millions of degrees, leaving a vacuum in the centre of the star. The outer layers of the star then start to rush inwards, pulled in towards the vacuum. They meet the energy pulse from the core, and this creates a shockwave that blasts outwards, ripping the entire star apart! This is a supernova, one of the most cataclysmic explosions in the universe. Very briefly, perhaps for a few days or weeks, this supernova will far outshine anything close by, and could be detected by us on Earth, but this too will pass.

The shells of gas and shockwaves expelled by the dying star form supernova remnants, beautiful wispy clouds of star-stuff that expand inexorably, and will slowly fade from view. M1, the Crab Nebula in Taurus, is a classic supernova remnant, produced by a supernova that occurred in 1054 and was recorded by Chinese astronomers as being four times brighter than Venus and visible through the day!

The remains of the star’s core may become one of two things. If the core was between 1.4 and 2 solar masses it will become a neutron star- an object made up entirely of neutrons and shrunk down to about the size of Edinburgh! A thimble-full of neutron star material would weigh hundreds of tons. If the core possesses more mass than this, it could collapse right down to be a Black Hole; a theoretical point of gravity so intense that nothing, not even light itself, can escape from it. It is thought that a black hole exists near the heart of our own galaxy.

The clouds of material produced by supernovae contain heavy elements, and it is through supernova explosions that these elements are spread throughout the universe. The material clumps together, combines and interacts with other gases in space, and eventually forms the next generation of stars, incorporating into their makeup the elements created in the death throes of previous stars. Any planets formed from these materials will also have these elements in them, and so life goes on.

The summer sky has many nebulae and supernova remnants to see, all of which mark a dying or dead star. The Ring Nebula in Lyra and the Dumbell Nebula in nearby Sagitta both show very well in small telescopes, and if you can wait until the darker skies of autumn, the ethereal threads and filaments of the Veil and Crab Nebulae, in Cygnus and Taurus respectively, will also be visible. When viewing them and others, perhaps reflect upon the mysterious cycle of stellar life and death in our universe.