Life but not as we know it

Is life exclusive to the Earth? Or could it be lurking somewhere else in our Galaxy?

Water is essential for life as we know it so if water is found elsewhere then so might life be. In our solar system there are a number of bodies identified as having water either on or below the surface at some point in their history and these include Mars, Europa, (a moon of Jupiter) and Enceladus (a moon of Saturn) as well as a few others.

Mars shows a vast number of features suggestive of running water at some point in the past. The question is, does liquid water still exist somewhere on Mars? The temperatures and pressures at the martian surface would suggest otherwise. However, recent tantalising photographs from Mars Global Surveyor show channels which appear to have formed within the last few years.

Europa, zipping around Jupiter, has an icy surface, criss-crossed with cracks that have oozed a brown gunk – possibly organic material. It is believed an ocean lies beneath this frozen exterior; if so, what exotic creatures might swim in these dark waters?

Enceladus is the surprise of the Cassini mission currently studying Saturn. Astronomers always thought that this little satellite was responsible for the ‘E’ ring but didn’t understand how. Close up pictures taken by Cassini reveal a plume of gas, water vapour and icy particles shooting out from the southern hemisphere of Enceladus indicating an internal water source.

What about the possibility of outside the solar system?

Over 200 planets have now been found orbiting other stars in our Galaxy. Until recently, all have been found to be gas giants ranging in size from many times larger than Jupiter to a little smaller than Neptune. Then just last month, the discovery was made of a planet with a diameter only 50% larger and a mass only five times that of the Earth. This strongly suggests that the newly discovered planet is a rocky one, just like the inner planets in our own solar system. What is even more exciting is that the estimated average temperature at the surface of the planet would allow liquid water to exist – something that is not possible on a gas giant.

The newly discovered planet orbits a red dwarf star called Gliese 581, which is 20.5 light years away and is one of the 100 nearest stars to us. A red dwarf star is much smaller and cooler than our Sun and therefore the habitable zone for this planet lies much closer to the star. When a low-mass planet orbits very close to its parent star it becomes much easier to find using a method that has proved the most successful so far at detecting exoplanets. Two other planets have already been found orbiting Gliese 581. One is the size of Neptune and the other just a bit larger than the newly discovered planet, making this a remarkable system.

Hopefully COROT, launched in December last year, will start looking for more planets that are thought to be composed of rocky materials in the habitable zones of other star systems i.e. the area around the star where the temperatures are just right for liquid water to exist on a planet’s surface. It will not view them directly but will look for a dip in light levels as the planet moves in front of its parent star. The Terrestrial Planet Finder from NASA, due for launch in 2012 – 2015, and Darwin from ESA, hope to detect planets using an array of telescopes which will be able to block out the bright light from the star in question and may actually then be able to detect the planets directly. By measuring the composition of certain gases in the planet’s atmosphere, it should then be possible to determine whether the planet might support life. Therefore these missions will be truly exciting as they may well be the first to detect life elsewhere in the Galaxy.

Gliese 581 and hence the new exoplanet can be found in the constellation of Libra, which appears due south in the night sky as the month progresses. Unfortunately, it’s not possible for amateur astronomers to see either Gliese 581 or the newly discovered exoplanet – the star requires a large telescope to view it but not even the most powerful telescopes can observe the exoplanet, as it is just too small and faint. The only way the planet can be detected at this present time is indirectly by looking for a tiny movement, or wobble, in its star caused by the planet orbiting around it.

Even finding the stars that make up the constellation of Libra at this time of year is difficult because the night sky is so light and Libra is not far above the horizon. Its brightest star, at magnitude 2.6, is Zubeneschamali and is unusual in being one of only a handful of stars to show a distinct greenish tinge. Look for the nearly full Moon on the 26th June because on this date it marks the position of Libra. 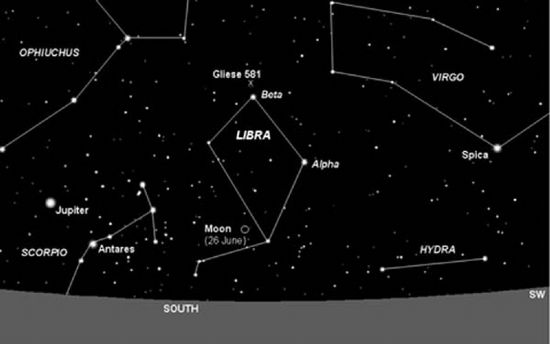 Another way to find Libra is to hunt for the brilliant red giant star of Antares in Scorpio. 400 times the size of the Sun it is slowly dying as it runs out of fuel, approaching the day that it will explode as a supernova. You will need a clear horizon though to spot Antares as it is very low in the southern summer sky.

Whenever you look for Libra, which will become easier as the year progresses and the nights become darker once again, think of the Earth-like planet orbiting a dim red dwarf. Could life exist here, and if so, might there just be intelligent beings looking back at us and wondering the same thing?