The Twins and The Charioteer

High overhead at this time of year lies the constellation of Gemini, the Heavenly Twins. This is an ancient constellation and one recognised by the Babylonian astronomers. It is one of twelve that forms the zodiac, a set of constellations through which the Sun appears to travel during the year. m lies an open star cluster visible through binoculars. This is M35, which consists of about 200 stars covering an area the size of the Moon, but is quite elongated in shape. A small telescope will show the stars within the cluster to be arranged in curving chains. Nearby is a very rich open cluster about 10,000 light years further away that appears as a fuzzy patch of light. This is NGC 2158, and it appears much smaller than M35, but should be in the same field of view of a small telescope at low to medium power. when viewed with a large telescope. Even a small telescope shows it as a blue-green ellipse with a central star. z and h lying just to the west of Capella are supposed to be her kids. Capella appears distinctly yellow in colour but is actually made up of two giant yellow stars, too close together to be separated by a telescope. is the largest and richest of the clusters and has a central orange star. M38 is a large scattered cluster of about 100 stars, which becomes a noticeable cross shape when viewed through a telescope. M36 contains only about 60 stars and is a relatively young cluster – none of the stars having yet evolved to red giant status.

The Zodiac is like a band, which encircles the Sun so that if the Sun is ‘in’ a constellation, e.g. Sagittarius, it means that we would have to look through the Sun to see the constellation on the other side, which we cannot do. However, at night the Earth turns to face the stars and now we are looking at the constellation that is opposite Sagittarius – Gemini. (This is an example only since at this time of year the Sun is considered to be ‘in’ Pisces).

The twin brothers of Gemini are known as Castor and Pollux. According to Greek myths and legends, their mother was Leda who was wife to King Tyndareus of Sparta but she was also seduced by Zeus while he was disguised as a swan. Castor was the mortal son of Tyndareus whereas Pollux was the immortal son of Zeus.

When Castor died, Pollux was so distraught that he asked Zeus to let him die too so he could be with Castor, but Zeus, touched by the devotion of the brothers, placed both of them in the heavens to form Gemini. 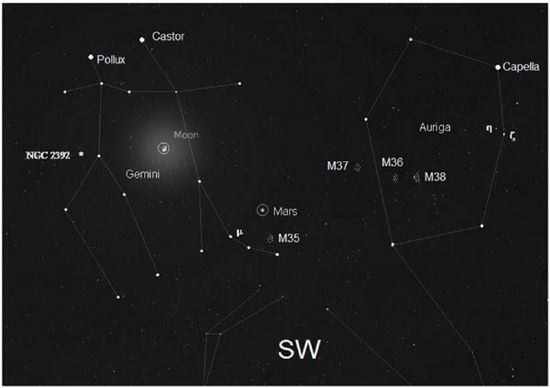 The two bright stars forming the upper part of Gemini are named for the twins Castor and Pollux. To the naked eye, Castor appears as a blue-white star but through a small telescope it can be seen to have two companion stars, one close by and the other fainter and a little further away. It has been discovered that all three of these stars have their own companions (although these can only be seen with a spectroscope) making this a sextuplet star system.

In mid December a meteor shower known as the Geminids appear to emanate from an area around Castor. There can be up to 100 meteors an hour and they are well worth watching out for.

Pollux is an orange giant star and is actually slightly brighter than Castor. Two lines of fainter stars extend outwards to form the bodies of the twins, their feet being marked by two other stars, which are a little less bright than Castor and Pollux.

To the right of

A beautiful planetary nebula, NGC 2392, is the Clown Face or Eskimo Nebula so called because it looks a little like a face surrounded by a Parka-hood

Auriga is known as the Charioteer and may represent Erichthonius, an ancient king of Athens who is credited with inventing the Chariot. The bright star Capella represents the she-goat Amaltheia who suckled Zeus as a baby. The stars

The Milky Way passes through Auriga so it is not surprising that this constellation is home to a number of open star clusters. The best known are M36, M37 and M38. All can be seen as hazy patches with binoculars but with telescopes they can be resolved into clusters of stars. M37 with about 150 stars

Between the right foot of Gemini and lowest star of Auriga, which is shared with Taurus the Bull (being the tip of one of its horns), is Mars. Known as the red planet, Mars does indeed have a distinctly dusky hue when it reaches its closest approach to Earth, known as opposition, every two years. However, due to Mars’ elliptical orbit, the distance between Mars and Earth at opposition varies and at the moment each close approach is further away than the last one. This will continue for several more years until 2014 when the two planets will begin to get closer together again at each opposition. The closest oppositions occur every 15 to 17 years – the last was in 2003.

Mars has passed opposition now, so is fading in brightness and size, but is still worth a look. When you do observe the half-Earth-sized planet, and you think of it as ‘small’, just remember the two tiny rovers (Spirit and Opportunity) that are currently exploring the dry, dusty Red Planet on Humankind’s behalf.