On the trail of a Comet

When we look up into the sky on a clear night, we may be lucky enough to see about 1000 stars without the use of a telescope. Using a telescope will increase that number to millions, and if you include all the stars in the other galaxies that the telescope would reveal, then billions or trillions. However, sometimes we can also see points of light that are not stars or planets. Some of the things we can see, even with unaided vision, are things we have made and put among the stars: Satellites.

Since the first man-made satellite, Sputnik, orbited the Earth in 1957, these things have really taken off (no pun intended). Our communications depend on them, our entertainment depends on them, and our space programmes depend on them. They are now essential to our 21st century way of living. Estimates vary, but it is thought that there are some 25,000 or more satellites up there, with the majority being obsolete, in decaying orbits that will bring them spiralling irresistibly downwards into our atmosphere until they eventually burn up.

Recently the unthinkable happened. On Feb 10th this year, 490 miles above Siberia, the satellites Iridium 33 and Kosmos-2251 collided. Both satellites were destroyed, which was more of a problem for the American Iridium 33, as Kosmos-2251 had been inactive and in a decaying orbit since 1995! The debris created by the collision has led to worries about the safety of other satellites in similar orbits, and it is hoped that the US Space Surveillance Network can track the debris.

With the recent ‘toolbag in space’ incident, people are beginning to be aware of man-made things floating around in Earth orbit, and are beginning to realise that we can actually observe these objects from Earth. Indeed, there is a website dedicated to the task of providing interested parties with all the information they need to locate and observe man-made satellites. www.heavens-above.com has a database of all the observable satellites. By creating an account and entering your exact observing location and time, you will be presented with time and position in the sky of any number of artificial bodies tumbling through Earth orbit in the sky above you. Some will be visible without any optical aid, while others will require binoculars. You will certainly be able to see the International Space Station on a regular basis, as well as some very bright “Iridium flares”, which produce a bright flash as sunlight bounces off the highly reflective aluminium antenna of the Iridium communications satellites (just like the now defunct Iridium 33).

This month’s sky chart shows a line across the constellations, that represents the ecliptic. The ecliptic shows the Earth’s path round the Sun, and also the path of the other planets. Comet Lulin is following a path that is very close to the ecliptic, so I have marked some points on the line to show the comet’s approximate progress along the ecliptic through the month.

Looking slightly beyond Earth orbit, we can see another rapidly moving object against the background of relatively ‘fixed’ stars. Comet C/2007 N3 “Lulin” can be seen moving across the sky, left to right, across the constellation of Cancer through March. In late February it achieved visual magnitude 6, making it just detectable with the naked eye from a truly dark site. Through March it dims slightly, but remains easily observable with binoculars or small telescopes. It has passed close by some major celestial landmarks in the last few weeks. On Feb 24th it was beside Saturn and on 28th it was very close to Regulus, the brightest star in the constellation of Leo. The comet continues its sweep across the southern sky, into and through Cancer, passing by the large open cluster M44 on the nights of 5th and 6th March. This pairing of objects will be stunning in binoculars from a dark sky site! Then it proceeds into Gemini, entering its boundaries by the middle of the month. Again, it will be easy to locate, using the obvious position stars of that constellation too. Look for it very close to the star Wasat in Gemini on the night of the 17t. There is an information page about Comet Lulin on our Society website, www.spacegazer.com, and a finderchart (which can be printed out) can be found at www.astrodrayer.com/lulin. 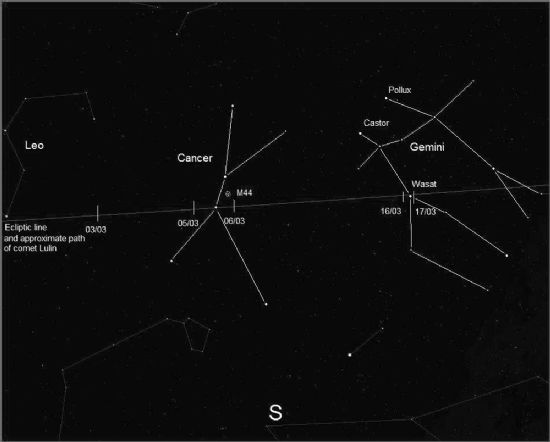 The comet is moving in the opposite direction to the background stars, and that means that you should be able to detect a discernible degree of motion after only a few minutes of observation. Interestingly, you should also be able to make out some obvious colour in this object. It glows green, a product of the gases that make up its atmosphere: cyanogen and diatonic carbon. Very few objects visible to small telescopes actually reveal any real colour, apart from the planets and the visually impressive Orion Nebula, so it is worth having a look if only for that reason. If you are drawn to seek it out, keep an eye open for the comet’s tails too. They may be hard to detect, so some patience may be required.

With a little planning you can spend some time in March looking out for man-made and natural objects whizzing around our sky. A cursory glance at the heavens-above website has predicted dozens of observable satellites at reasonable evening timeslots, and to then move outwards and upwards and view a fine cometary visitor would be a great way to spend a clear evening.