The Fleas of the Hunting Dogs

Last month’s Seeing Stars article discussed a pair of canine constellations. This month’s will continue the doggy theme by exploring Canes Venatici-the Hunting Dogs. The constellation lies in a rather barren area of sky under the tail of the Great Bear and contains only 2 stars: the brightest star, Cor Caroli (magnitude 2.9) and the much dimmer Chara. Old pictorial star maps showed two dogs being held on leads by Bootes, the Herdsman, as they chased the Great and Little Bears around the Pole Star! The constellation’s name was due to a mistranslation of Greek to Arabic then to Latin, as the area was originally associated with the Herdsman’s cudgel rather than his dogs.

Cor Caroli Regis Martyris, or Cor Caroli for short, used to be known as Asterion but the star was later named after the executed King Charles the first and means ‘heart of Charles’.  It is one of the most attractive double stars for small telescopes, with the primary being bluish and shining at magnitude 2.9, with the fainter magnitude 5.4 secondary showing a yellow hue. Together they make up a true binary system with an orbital period of 10,000 years. The bright primary is a chemically peculiar star with an abundance of odd elements associated, we think, with strong magnetic fields and enormous sunspots. The only other star of note is in the constellation is the irregular variable Y CVn. This is easily found by taking a right angle turn from Cor Caroli and Chara towards the Great Bear’s tail. Called ‘La Superba’, it is a carbon star and is a deep red colour. It is usually invisible to the naked eye but any form of optical aid, even binoculars, will show its intense red colour.

What Canes Venatici lacks in stars it makes up for in globular clusters (one, but bright) and galaxies (several).  At 6th magnitude, M3 is one of the brightest globular clusters in the northern hemisphere and is located between Cor Caroli and the brightest star in Bootes: the orange Arcturus. It can be seen as a fuzzy spot in binoculars and its individual stars can be resolved in a medium-sized telescope. 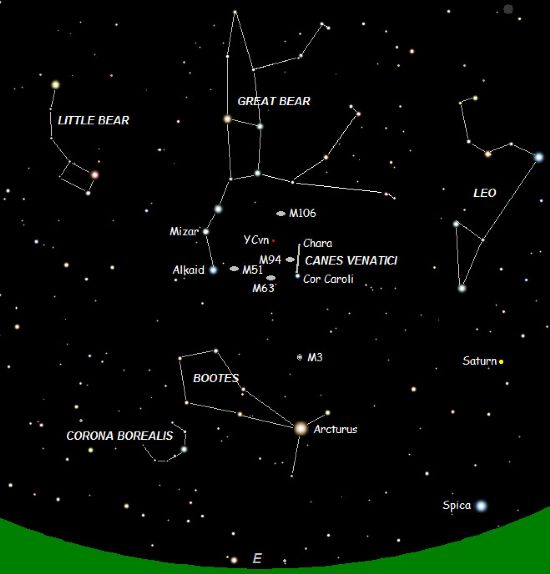 Canes Venatici’s most celebrated object, however, is without doubt M51: the ‘Whirlpool Galaxy, an 8th magnitude object close to Alkaid, the last star in the tail of the Great Bear. This was the first deep sky object to be recognised as a spiral galaxy, In 1845. The Third Earl of Rosse, using the 72-inch speculum mirror reflector at Birr Castle in Ireland (then the largest telescope in the world) noticed that M51, which was thought to be a gaseous nebula at the time, had spiral arms. The contemporary 19th century theory of choice explained these ‘spiral nebulae’ - like M51 and the more famous Andromeda Galaxy - as nearby gas clouds. This is the reason why gaseous deep sky objects are called ‘nebulae’, as in the 19th century the word ‘nebula’ was used to describe anything of a cloudy indeterminate nature, as it came from the Latin for ‘cloud’. It was not until Edwin Hubble used the newly discovered Cepheid period-luminosity relationship in 1923 (similar Cepheid periods have similar absolute magnitudes and therefore can be used as cosmic yardsticks) that it was realised that spiral nebulae were enormous galaxies like our own, at vast distances from us. M51 is 37 million light years away and its spiral structure can just be seen in excellent conditions with an 8-inch telescope. But there is more - not only is M51 the classic face-on spiral galaxy, but it is the archetypal interacting galaxy; the brightest and most obvious in this class.

To its north, connected by a bridge of luminous material, is the 9th magnitude galaxy NGC 5195. The connection between it and M51 is not a line of sight effect, but it is orbiting the Whirlpool at an inclination of 73 degrees and is presently 500,000 light years behind the northern spiral arm of M51. In photographs, the spiral arms of M51 appear slightly bent and stretched towards NGC 5195, and some theories even suggest the spiral shape of M51 is caused by the twisting orbital motion between the two objects. Charles Messier himself discovered M51 in 1773, while his close friend and associate, Pierre Mechain found NGC 5195 in 1781. The two objects can just be seen as a pair of out of focus ‘stars’ in 10x50 binoculars.

Belonging to the same group of galaxies as M51, and at roughly the same distance away, is the equally beautiful M63: the famous ‘Sunflower Galaxy’.  At magnitude 8.6 it is found between Cor Caroli and Alkaid. Its name comes from its exquisite appearance in photographs, which show its spiral arms dotted by clumps of luminous material giving it an appearance of a flower in bloom. It too is a spiral galaxy but is inclined to us at an angle of 30 degrees.

Another Canes Venatici spiral galaxy is the easily located 8th magnitude M94. Forming the apex of an isosceles triangle with Cor Caroli and Chara, it is famous for its small but bright nearly circular core surrounded by a fainter halo. These are rings surrounding this core, with the inner one being associated with star formation activity and the outer ring appearing to be made up of tightly wound spiral arms. M94 may contain a bar of material running through its centre – making it a barred spiral galaxy.

Finally, another of Pierre Mechain’s galactic discoveries, is M106. This is a fascinating spiral galaxy and is quite easily seen at magnitude 8.4. M106 has been the subject of much study, as it emits much more radiation in the radio wavelengths than it does in light. This study has revealed that the galaxy has an enormous amount of mass in a relatively small area of space, leading to the suggestion that a black hole resides at the galaxy’s centre.

So lots of faint(-ish) fuzzies in a rather bland bit of sky – you could think of them as fleas escaping from the ‘Hunting Dogs’!