Galaxy Clusters And The Large Scale Structure Of The Universe

Our Galaxy is home to about two hundred thousand million stars, with most being found in the spiral arms of this impressive disc shaped structure. Our Sun nestles in one of these arms with its family of planets. Although distances within the solar system appear vast, our local region of space is dwarfed by our huge Galaxy; to put it into perspective, if our solar system was the size of a cup then our Galaxy would be the size of North America.

Ours is not the only galaxy in space; we can see the massive Andromeda Galaxy, M31, as a smudge with the naked eye from a dark sky site, or as a clearly defined oval glow in binoculars. The Triangulum Galaxy, M33, is another spiral that is more easily viewed with a telescope. Close by, i.e. within six to eight million light years, there are another 30 or so galaxies, some irregular, others dwarf ellipticals (the commonest type of galaxy in the universe) and together with the three large spirals they make up our Local Group of galaxies.

Dotted around our Local Group are other clusters of galaxies, some small, others large, containing thousands of members and covering an area tens of millions of light years across. The Virgo cluster (with just over 2000 galaxies) in the constellation of Virgo is the closest massive cluster to the Milky Way at only 60 million light years away. M87 is an enormous elliptical galaxy near the centre, which is thought to be pulling the other galaxies within the cluster towards it. Many of these galaxies are bright enough to be seen with a telescope, and some with large binoculars.

The Coma cluster has 3000 galaxies sprawling across 20 million light years, although most of the individual galaxies are located in the central area, bound together by gravity. Another cluster, Abell 2218, is found in the constellation of Draco and is extremely far away at 2 billion light years. Some of its galaxies should be too distant to see even with powerful telescopes but for the fact that the gravity of this cluster is so strong that it behaves like a magnifying glass. This phenomenon is known as gravitational lensing.

There is a mysterious concentration of mass known as the Great Attractor lying in the direction of the constellation of Centaurus. It is gradually pulling tens of thousands of galaxies over an area hundreds of millions of light years in diameter towards it. Moving swiftly at about 600 kilometres per second is our Milky Way and the other members of the Local Group, whereas other galaxies and their associated clusters are speeding along at even grater velocities. Although all these galaxies are receding from us and from each other in accordance with Hubble’s law, they are moving in such a way as to suggest they are being drawn towards this gravitational anomaly. It was Hubble who realised that the universe is expanding. His law states that the greater the distance to a galaxy, the faster it is moving away from us.

As we journey further into space more galaxy clusters become apparent. If it were possible to draw back and look down on these clusters they themselves would be seen to cluster together to form vast accretions known as superclusters. These are the largest structures known.

At this scale the Universe looks like a huge foamy expanse with the voids appearing as vast bubbles while the superclusters are connected by elongated filaments and sheets, which lie against them. 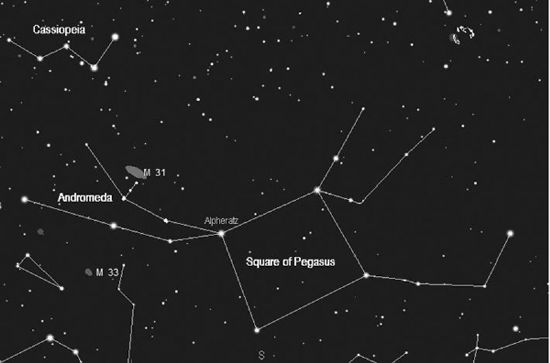 Returning to Earth in our local area of space it is noticeable that the nights are drawing in rapidly. The visible plane of our Milky Way Galaxy rides high overhead and is a glorious spectacle from a dark sky site. Familiar constellations are returning, including Pegasus the winged horse and Andromeda, whose constellation starts at one corner of the square of Pegasus. High in the south the square can be used as the starting point to find the Andromeda Galaxy, our nearest galactic neighbour and the most distant object that can be seen with the naked eye.

Start with the star that marks the top left hand corner of the square, known as Alpheratz, and count two bright stars diagonally upwards, then two fainter stars to the right. Just above and to the right of the second star you may see a faint sausage shaped fuzzy patch – if your sky is dark enough. Binoculars will make the fuzzy patch slightly more solid but don’t expect to see individual stars within the galaxy. It is best to search for the Andromeda Galaxy from a dark sky site but it is still possible to find it with binoculars from your back garden even if there are streetlights around.

So, from our vantage point in the northern hemisphere of the ‘pale blue dot’ that is Earth, we can explore the trail of stars that marks out our own galaxy, as well as our closest (and getting closer) companion, the Andromeda Galaxy. And they are only two, out of the countless number of other galaxies woven into the endless fabric of our universe.