Open clusters, stellar associations born together out of the same cosmic cloud of gas and dust, have been known ever since man looked up at the sky. The Pleiades and Hyades in Taurus are clearly visible to the naked eye and have legends associated with them from all around the world.

In 1767, Reverend John Mitchell, surmised open clusters were physically related, as the chance alignment of such a large number of bright stars was extremely remote. Open clusters have great importance to the astrophysicist, as their constituent stars are all assumed to be at a similar distance from us, as the space between the stars in a cluster is insignificant compared to the vast distances in space. This assumption was further strengthened when the actual movements (the proper motion) of the individual members of close open clusters, like the Pleiades and the Hyades, were found to be in the same direction. Later, Doppler shifts showed cluster members also had similar speeds (radial motion) through space. Therefore, stars within a cluster, having come from the same initial dust and gas cloud, are all about the same age and chemical composition, are at the same distance from us and are moving through space at the same speed and direction. The only differences between individual members are size and mass, knowledge of which can be used in the study of stellar evolution for it has been found that massive stars have shorter life expectancies than their smaller cousins due to the faster consumption of fuel.

Around 1200 open clusters are known in our Milky Way, though this is probably an underestimate as only the brightest ones will be visible. They are strongly concentrated round the spiral arms - logically as this is where gas densities, and as a result stellar formation, is highest. They have a short life span of ‘only’ several 100 million years, as during their journey through space, objects interact with them and gravitationally weaken the ‘family’ bond leading to the eventual dispersal of the cluster. All stars were probably born in clusters. The Hyades, near the brightest star in Taurus, and the Beehive cluster, in middle of Cancer, are our nearest and youngest open clusters. Tracing back their proper motion through space each appears to have formed from their own molecular cloud before gradually drifting apart. The Pleiades are middle aged, roughly 100 million year old, and is journeying through space in the direction of the foot of Orion. The oldest clusters are M67 in Cancer and NGC 188 near Polaris. Both these objects are several billion years old and have probably survived due to their location well above the galactic plane - away from objects that might disrupt the clusters’ gravity. 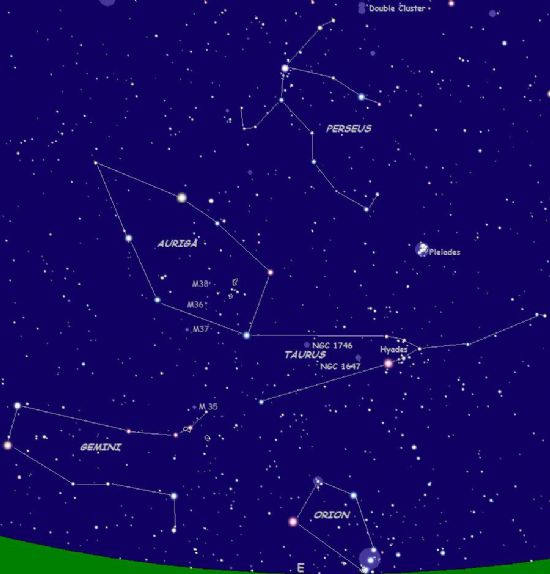 The Hyades and Pleiades in Taurus, and perhaps the Beehive cluster in Cancer, are visible to the naked eye. However binoculars and small telescopes are perfect for observing these objects as their wide field of view can encompass the full area of the cluster. They are easy for the non-artist to draw and much fun can be had making fanciful patterns out of the clusters' shapes. One of the great astronomical historical mysteries is why Messier included the obviously stellar Beehive cluster (M44) and the Pleiades (M45) in his catalogue of non-cometary objects yet did not include the Double Cluster of Perseus, which, to the naked eye, could be confused with a comet.

The October skies are littered with open clusters. Early on in the evening there is M11, the Wild Duck Cluster in Scutum, seen as a fuzzy patch in binoculars and small telescopes. I can see no similarity whatsoever to any flying object far less some ducks but that is its given name! Cassiopeia, lying along the centre of the Milky Way, is awash with open clusters, far too many to individually name and identify but a pleasure to explore with binoculars. Between Cassiopeia and Perseus is one of the most magnificent objects in the whole night sky-the Double Cluster. NGC 869 and NGC 884, as they are officially called, are the best known of the ten double open clusters in the heavens. They are non-identical twins with varying sizes, shapes and different colours of stars. An added reason for looking at the Double Cluster on the 7-8 October is the presence of a potentially bright comet, Comet Hartley 2. Cygnus, lying in a similar position along our galaxy, has 2 good open clusters, M39, a big M-shaped object ‘above’ the brightest star Deneb and the diminutive fuzzy patch M29 ‘below’ Deneb. Going further east we reach the fine line of Messier clusters in the centre of Auriga, M38, M36 and M37, all visible in binoculars and small scopes, all varying in shape and size. Next comes the naked eye Pleiades and V-shaped Hyades in Taurus. The Hyades is rather a sparse cluster not particularly interesting in binoculars but the Pleiades reveals many more members with optical aid. The next constellation, Gemini, has one bright cluster M35 near the ‘leg of the top twin’. Cancer with its young Beehive cluster and its ancient M67 are visible much later on in the night.

So plenty to keep the binoculars occupied during October. Happy hunting!