Succeeding in his quest to kill Medusa, the gorgon, Perseus was on his way home when he chanced across Andromeda chained to the rocks and about to be sacrificed to Cetus the sea monster. In his hand was Medusa’s severed head. Thinking quickly, he held it up to face Cetus, thus turning the sea monster into stone.

The constellation is an ancient one and forms an upside-down Y of stars. The brightest star is alpha Persei, a yellow-white super-giant of magnitude 1.8. It sits at the fork of the Y, surrounded by a scattering of stars forming a loose cluster known as Merlotte 20, easily seen through binoculars. 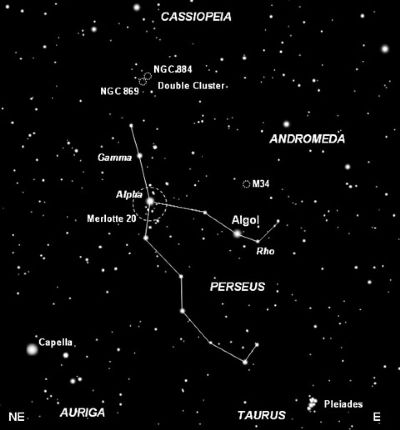 Medusa’s evil eye is marked by Algol, one of the best-known variable stars in the sky. It is a so called eclipsing binary, a system of two stars in which the fainter star passes in front of the brighter one, reducing its brightness from magnitude 2.1 to 3.4 every 2 days, 20 hours and 49 minutes. The two stars are too close together to be separated optically but spectroscopy shows the brighter star to be about a hundred times as luminous as our Sun.

Algol has been known since ancient times and was called ‘the Ghoul’ (El Ghoul) or ‘the Demons Head’ by the Arabs, ‘Satan’s head’ by the Hebrews and ‘piled up corpses’ by the Chinese, all associating it with something nasty. It is part of the shorter, right arm of the upside-down ‘Y’, and the star below Algol is another variable, rho Persei, a red giant.

Another eclipsing binary is the yellow giant star, gamma Persei, and it is from this area of sky that the Perseid meteors appear to emanate. This is the best and most dependable meteor shower of the year occurring between 23rd July and 22nd August and peaking around 12th and 13th August when 75 to 100 meteors can be seen per hour.

Beneath a curve of bright stars forming the left arm of the upside-down ‘Y’ are the Pleiades, a bright open cluster in Taurus and probably the most famous of all star clusters. Binoculars will reveal dozens of young stars that have been formed in the last 50 million years and, when using small telescopes, faint nebulosity may be seen surrounding the cluster.

Binoculars are a great way of viewing the night sky. Many celestial objects like the Pleiades are too large to comfortably fit into the field of view of a telescope whereas, by covering a wider area, binoculars can observe the entire object.

From a dark sky site, look up at the Milky Way. Use binoculars and suddenly the milky area of sky becomes thousands of bright jewels as we look through one of the spiral arms of our Galaxy. Scan the area and other open star clusters will become apparent. The stars will appear different colours and some may even be resolved as doubles. See a moving star? That may be a satellite. Many can be seen with binoculars as well as with the naked eye as they orbit far above our Earth. A bright satellite may turn out to be the International Space Station; the solar panels reflecting the sunlight as it passes overhead.

Lying in a rich part of the Milky Way, the constellation of Perseus and its surrounding area are well worth exploring using binoculars. There are a number of star clusters, including the well-known Double Cluster just above the tail of the upside-down ‘Y’ and below Cassiopeia. This is a superb pair of young, open star clusters, each covering an area the size of the full Moon. NGC 869 is the brighter and richer of the two, whereas the stars in NGC 884 are more scattered with several noticeable red giants. To the south east of Algol, binoculars will also show M34, an older, open cluster containing about 60 stars sprinkled over quite a wide area.

Take time to examine the night sky with binoculars and you will be well rewarded.