The Last of the Summer Triangle

Summer is all but over and with every passing night the summer triangle consisting of the bright stars Vega, Deneb and Altair gradually drifts towards the west.

Altair is the brightest star in the constellation of Aquila, shining at magnitude +0.77 and is the 12th brightest in the sky. It lies relatively close by at a distance of 17 light years, making it one of our closest neighbours. Proxima-Centauri, part of the Alpha Centauri system, is the nearest star to our Sun at just 4.2 light years away.

The second largest of our ‘birds’ in the summer skies, Aquila depicts an eagle with wings outstretched as he sits surveying the world from a southerly position in the heavens. Aquila was a mythical eagle sent by Zeus to abduct Ganymede, a shepherd boy, and carry him off to the top of Mount Olympus to become the new cupbearer for the gods.

To find Aquila, first find the summer triangle, and the most southerly of the bright stars will be Altair. To check this is the correct star, look for a fainter star slightly above and to the right: this is gamma Altair. If you have a dark sky, you should also notice a still fainter star below and to the left: this is beta Altair. All three stars form a line with the brightest one – Altair – in the centre. Next search for the stars forming the eagle’s wingtips and finally, below Altair, the stars of the tail should be seen. 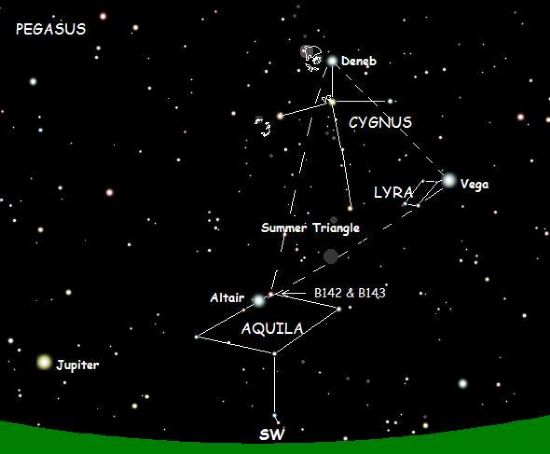 The Milky Way passes through Aquila and on a clear, dark, moonless night it is worth taking the time to scan the area with binoculars. The observer will be rewarded with myriad stars glittering like jewels on a velvet background. Many will reveal their subtle colours, reflecting the stars’ temperatures. This stretch of the Milky Way is well known for the occurrence of novae – stars which appear to flare into brightness, lasting perhaps a couple of weeks before fading away again. A nova usually occurs in a system of two stars where one is a white dwarf star and the other a much larger star. The white dwarf’s gravity is very strong and it pulls material off its companion star. Every 100,000 years or so, the white dwarf accumulates enough gas to trigger a thermonuclear explosion resulting in a sudden brightening and we call this a nova. Although it appears to be the companion star that brightens, it is in fact the white dwarf that does so.

Also noticeable in the region of Aquila are some dark ‘clouds’ which appear to split the Milky Way into two. This area is known as the Cygnus Rift, which begins in the constellation of Cygnus and continues on into western Aquila. These dark areas, where the stars seem to vanish, are due to clouds of dust that obscure the stars beyond and are called dark nebulae. The dust itself comes from old stars that form dust grains in their outer atmospheres and also from supernovae explosions. This dust is needed to make planets, plants and people and which is why it is said, “we are made from star dust”.

Very few deep sky objects are found in Aquila but this region is home to some dark nebulae for example B142 and B143. This pair of dark nebulae creates a well-defined dark area on the Milky Way about the size of the full Moon with a distance from Earth estimated to be about 2000 light years.

Move down from Aquila and a little to the left, and there, shining brightly fairly low down on the southern horizon, will be Jupiter. Good binoculars and a dark sky will show the four Galilean moons. These take part in a dance with their parent world, sometimes appearing at the edge of Jupiter, sometimes seeming to disappear as they move behind or in front of the planet, their positions changing constantly. They were observed and described by Galileo when he first used a telescope 400 years ago, and to celebrate this anniversary, 2009 has been designated the International Year of Astronomy.

Telescopes have come a long way since Galileo turned his crude refractor towards Jupiter and nowadays many of those owned by amateur astronomers can show the banding structure Jupiter is well known for. These belts and zones are clouds at the top of the atmosphere being blown in opposite directions by strong winds. Large telescopes will reveal the Great Red Spot – a storm the size of two Earths that has been raging for over 350 years. It’s actually a high-pressure area with a tilted, twisted structure that resembles a crooked spiral staircase. Beneath the gaseous atmosphere is a layer of liquid hydrogen and helium, and below that is a strange substance called metallic hydrogen. At the very centre is a core of rock and ice squeezed so hard, due to the tremendous pressures, that its density is probably greater than the density of lead.

The observing season is well and truly with us once again, so go out and catch Aquila sitting on his perch within the summer triangle before it disappears. Use binoculars to sweep over the Milky Way, which stretches like a band high above us at this time of year, and then train them on Jupiter. Can you spot all four of the Galilean moons?