Tucked underneath the tail of the Great Bear in the Northern Sky is another member of the celestial menagerie, Canes Venatici, the hunting dogs. The dogs, Chara and Asterion, are represented by a fairly small constellation and belong to Bootes the herdsman. They endlessly chase both the little bear and the great bear around the pole star. It is not one of the classical constellations and was only put into the sky in 1690 as a result of the posthumous publication of a sky atlas created by Johannes Hevelius, a Polish-German astronomer.

Although small in size, CVn (Canes Venatici) has many interesting objects for the observer. The main star, alpha (mag 2.9), is one of the most attractive double stars in a small telescope or binoculars. The companion star is mag 5.6 and the colour contrast between them seems be subtle and very much in the eye of the beholder. Named Cor Caroli (the ‘Heart of Charles’), reputedly by Sir Edmund Halley to honour King Charles II, it seems more probable that the original intent was as a memorial to the executed Charles I but political discretion proved the better part of valour in those times.

Y CVn, ‘La Superba’, visible in binoculars, is one of the reddest and coolest stars in the sky. It is a pulsating variable and its brightness ranges from mag. 4.8 to 6.3 over a period of 160 days. It is a dying supergiant with a diameter greater than the orbit of Mars and a relatively cool surface temperature of 2200 degrees. The startling red colour is due to carbon, produced as a by product of the nuclear fusion of helium at its core, making its way to the surface before escaping into space. It is surrounded by a huge detached self-made shell of material 2.5 light years wide. Nearing the end of its life, it will soon puff off its outer layers before becoming a white dwarf - the same fate which awaits our Sun. 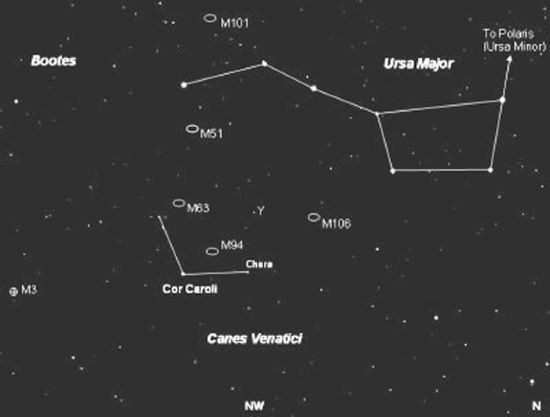 M3, visible as a hazy patch in binoculars, is a beautiful globular cluster and is one of the sky’s brightest at mag. 6. Telescopes of 4” or more will resolve individual stars and large telescopes will reveal many thousands of stars on the fringes, leading into a blazing central mass.

M51, the spiral Whirlpool Galaxy, and its irregular companion NGC 5195, are a beautiful sight in a medium to large telescope. A really dark sky may allow a binocular sighting of these interacting galaxies. M63, the Sunflower Galaxy, is another fine telescopic spiral with multiple arms. M94 is a bright compact spiral seen face-on, as is the slightly fainter M106.

Most people know that galaxies are collections of stars but less well known is the fact that there are different types, or classifications, of galaxies. There are three basic types; spiral, elliptical and irregular, and these classifications were introduced by the American astronomers Edwin Hubble, after whom the space telescope is named, and Milton Humason in the 1920s. Star populations in galaxies range from millions to trillions.

Spiral galaxies have a large, flat dish with a central bulge (like back-to-back fried eggs) and often contain a large mass of interstellar matter. The stars and matter in the dish are usually arranged in two or more steamers or “arms” that spiral out from the central bulge, hence their name. These galaxies still support active star formation, mainly in the outer regions, with older stars gravitating towards the centre. Current theories suggest an active black hole lurks within. Our home galaxy is such a spiral and we live in the Orion arm.

Elliptical galaxies contain little or no interstellar material and have been described as cosmic footballs as they have the bulge without the disc. They contain old, so called population II stars only and no longer produce new stars.

Irregulars are galaxies with no discernable shape and have usually been distorted by gravitational interaction with intergalactic neighbours. These interactions can result in shock compression of the hydrogen, leading to furious star formation.

V.M. Slipher of the Lowell Observatory in Flagstaff had earlier discovered that galaxies were receding at high speed and Hubble built on this information with his own measurements of distances to a handful of galaxies and irrevocably changed the then prevailing view of the Universe.

Using Cepheid variables, the ‘standard candles’, Hubble proved that nearby galaxies lie far beyond the Milky Way and are moving away from us at a speed proportional to their distance, now known as Hubble’s Law. Conclusion – the Universe is expanding.