The Polestar and The Dragon

In the Northern Hemisphere we are currently in the fortunate position of having an obvious star less than 1 degree from the North Celestial Pole (NCP), the Polestar known as Polaris or Alpha Ursae Minoris. At present the Southern Hemisphere is not so fortunate, having only a very faint, barely-visible naked eye star known as Sigma Octantis close to the pole. This will not always be the case though, due to an important but subtle movement of the Earth's axis called precession.

Around 130 BC, Hipparchus discovered by careful (naked eye) observations, a tiny difference between the precise timing of the seasons and the Sun’s position in the stars. Because of our Earth's rotation, our planet is slightly oblate, being somewhat flattened at the poles and bulging at the equator. The Sun and Moon exert a pull on the bulge causing our planet to wobble like a spinning top. The full cycle of this precession takes about 25,800 years, during which the projection of the Earth's axis of rotation onto the celestial sphere describes a circle with a radius of about 23½ degrees. This is equal to the 23½-degree inclination of the Earth’s to its orbital plane. Precession causes the first point of Aries and Libra to drift westwards around the elliptic. These points mark the location of the ‘equinoxes’: points when the sun crosses the ecliptic and the hours of darkness and daylight are of equal length. 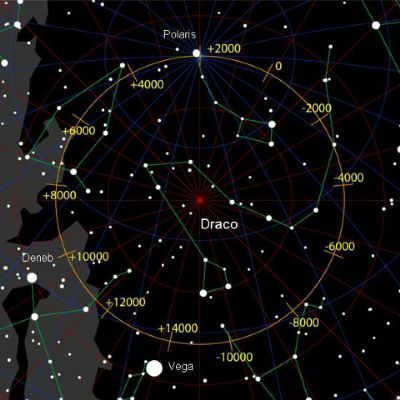 Polaris has been our Pole Star for the last millennium or so, much to the benefit of early seafarers, as its angle of altitude was equal to the observer’s latitude. At present Polaris is slowly closing the gap to the NCP, until in 2100 it will lie within 27 arc-minutes, the closest any star will ever get to the celestial pole. After this close approach the NCP will slowly drift to an area of sky with no bright stars, before arriving at the constellation of Cepheus 4000 years from now. In about 1000 years time the NCP will be located in Cepheus, with Gamma Cephei (Errai) being the closest easily detectable star to it. Then, in about 4400 years time, Alpha Cephei (Alderamin) will take over the post of Pole-guardian. At about the year 14000, the very bright star Vega (one of the members of the Summer Triangle asterism) will become the Pole Star, and will be probably the brightest holder of that role, being very close to visual magnitude zero. Between 10,000 - 13,000 years from now, both South and North celestial poles will be marked by bright stars. In the north then, two members of the Summer Triangle (Vega and Deneb) will hold the title over the next 13000 years or so, while in the southern sky Gamma Velorum in the constellation of Vela will be the southern Pole Star. Aligning equatorially mounted telescopes in Australia will be very easy during this time! Thereafter, the NCP drifts into the sprawling constellation of the dragon, Draco, where it spends nearly half of its axial circuit.

Currently seen high to the northwest, Draco twists itself like an upside-down question mark round Ursa Minor, the Little Bear, with its prominent head of four stars arching towards Lyra and Hercules. Its brightest star, Alpha Draconis (Thuban), is only magnitude 3.6, so the constellation needs a dark sky to show itself easily. This star will mark the NCP 22,400 years from now, and was the polestar during the time of the ancient Egyptians. At one time it was thought the alignment of the descending passageway of the Great Pyramid near Cairo was aligned to this star, but recent calculations have discounted this idea.

Draco is an ancient constellation. The Egyptians likened it to a crocodile or hippopotamus, whereas the Persians and Romans thought it was a mighty serpent. The Arabs, more in tune with precession perhaps, described it as a herd of camels, wandering around the North Pole. The constellation, though large in extent, contains no bright or famous stars, and no real Messier objects. The most famous object is perhaps the blue planetary nebula, NGC 6543 ‘The Cats Eye’ near Zeta Draconis. This is easy to pick out with a telescope at magnitude 8.1. Another interesting object is the ‘lost’ Messier object, M102. Pierre Mechain, a contemporary of Charles Messier, discovered an object near Iota Draconis, which Messier added to his list as M102. The Messier list was created because the astronomer wanted to eliminate the ‘faint fuzzy’ objects that he continually stumbled across in the skies over 18th century Paris in his search for comets. A few years later Mechain admitted an error in M102’s location, and dismissed the object. Nowadays, observers are of the opinion he was probably looking at NGC 5866, a magnitude 10 elliptical galaxy not discovered until long after the creation of Messier’s list.

The next time you are outside looking at the Plough remember to use the pointers to find Polaris and from there you can pick out the constellation of the Little Bear. Between the Little Bear and the Great Bear, the long drawn out constellation of Draco can be found. One day in the future, one of the stars in his tail will become the Pole Star.