Mars is now heading this way again. On the night of December 18th/19th 2007, it will have an apparent size of 15.9 arc-seconds. This isn’t as large as it appeared in August 2003 but it will be better placed for observation this time around. Mars will be in opposition to the Sun (and therefore at its shortest distance from the Earth) on December 24th, shining brightly from the constellation of Gemini at magnitude -1.6 and will then show its fullest face to Earth-based observers. 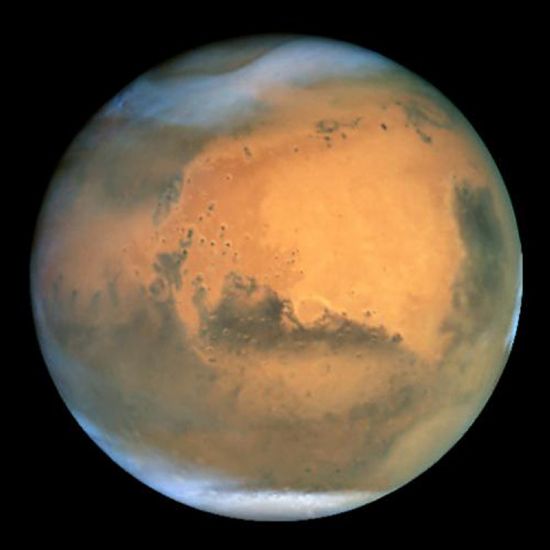 Although Mars is known as the red planet, it actually looks orange in the sky. The colour is due to the surface going rusty; iron minerals in the soil have become oxidised, perhaps suggesting warm, wet conditions on the surface in the past.

In the 19th Century, Italian astronomer Giovanni Schiaparelli thought he saw a vast network of long, thin lines criss-crossing the surface – he called them canali. Percival Lowell became convinced they were canals that had been constructed by intelligent life to transport water from the polar ice caps to irrigate the Martian desert. He built the Flagstaff Observatory especially to observe them. When the first spacecraft took close-up photos of the surface, it was found that the canals did not exist. They are, in fact, illusions created when the eye sees details too small to be resolved and the brain interprets them as lines.

Mars is just half the size of Earth. Most of the time it doesn’t usually look particularly bright in the sky and through a telescope it usually appears as a featureless tiny blob. However, due to its eccentric orbit, Mars reaches perihelion (closest point to the Sun) every couple of years, and when this coincides with the Earth being in the same part of the sky, Mars appears brighter and larger. In August 2005, the angular diameter reached just over 20 arcseconds. This is much smaller than Jupiter ever appears to us, but it was large enough to make out features on its surface quite easily and proves why it is such a good idea to take advantage of close approaches to view the planet in detail. Mars will not come as close to Earth again until 2018, so we will have to wait a while before having such views again.

The northern and southern hemispheres of Mars are very different from one another. The north consists mostly of flat, low-lying, predominantly volcanic plains with comparatively few craters suggesting relative youth, whereas the south is made up of higher, heavily cratered terrain dating back to the heavy bombardment by solar system debris about 3.9 billion years ago. Some of the impacts have created enormous scars like the Hellas Basin – the largest impact crater on Mars with a diameter of 2300 km. During the southern Martian winter, it becomes very noticeable in telescopes as a brilliant white disk.

When viewing with a telescope, it should be possible to make out light and dark features on the Martian surface, the most noticeable of which is Syrtis Major – a dark, prominent triangular marking just north of the equator. The dark areas tend to be bare rock or dusky sand and other dark markings worth looking for include Mare Erythraeum, Lacus Solis (the "Eye of Mars"), Mare Acidalium and Niliacus Lacus. Light, yellow regions are the cold, Martian deserts covered with the ubiquitous windblown dust.

Red and orange filters may help the surface features stand out a little better but it is important to spend time observing Mars, not only to train your eye, but also to wait for the brief moments of good seeing when details will become apparent. When Syrtis Major is on the planet’s limb and viewed through a yellow filter, the area can appear bright green. 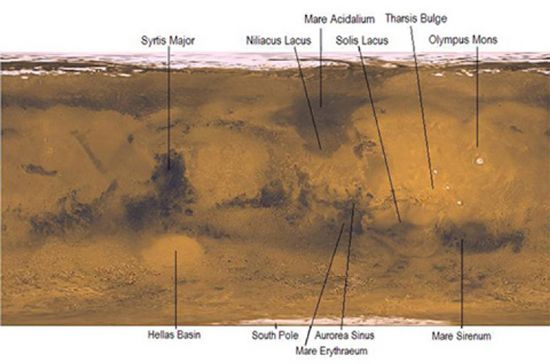 Image courtesy NASA/JPL-Caltech. This image labels the features you may see on the surface if your telescope reverses the image. Other telescopes may invert the image so that south will be at the top.

Despite the height of some of the volcanoes on Mars – at 27km high Olympus Mons is three times the height of Mount Everest and the tallest volcano in the solar system – small telescopes will not be able to resolve them but may show light patches above their peaks; these are clouds, which often form over high features and have been viewed with telescopes since the 19th century. 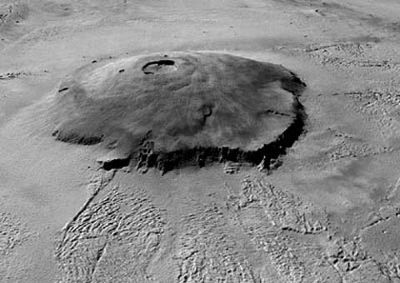